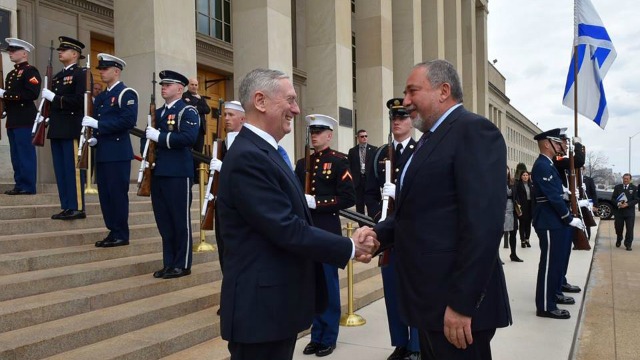 Israeli Defense Minister Avigdor Lieberman was hosted at the Pentagon on Tuesday by US Secretary of Defense James Mattis — their second meeting since the Trump administration came to power in January.

In a Facebook post after the meeting, Lieberman said he and Mattis discussed common security issues facing Israel and the US.

“Strategic cooperation between Israel and the US is vital and critical to not only Israel’s security, but also the security and stability of the entire Middle East,” Lieberman wrote.

Israel’s Channel 10 quoted Lieberman as saying on Tuesday, “We need an active US in our region.”

Lieberman was also set to meet with Vice President Mike Pence and Secretary of State Rex Tillerson while in Washington, DC.

After his first meeting with Mattis last month — on the sidelines of the Munich Security Conference — Lieberman stated, “The three main problems we must handle are Iran, Iran and Iran. We must build a genuine and effective coalition to deal with the terrorism it [Iran] spreads around the world, the development of missiles it is engaged in and its nuclear arms race.”