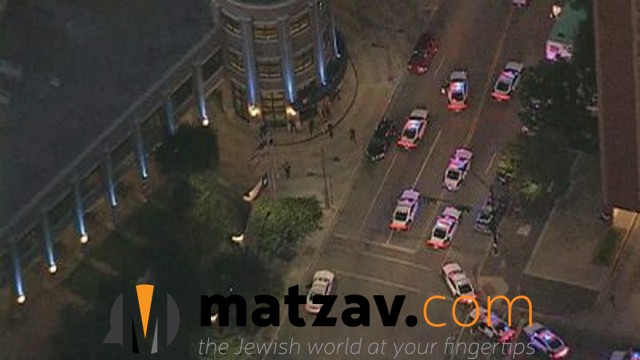 At least five Dallas law enforcement officers were killed and six wounded Thursday evening as a protest over recent police shootings was interrupted by chaos.

After a peaceful march, the downtown suddenly exploded into violence at around 9 p.m. local time when gunshots echoed across through the streets, sending protesters and police officers alike scattering for cover.

Videos circulating on social media showed an individual with an assault-style rifle shoot a police officer in the back at point-blank range.

A gunman, believed to be the same shooter, then engaged in a violent, three-hour standoff with SWAT officers, police said.

At around 4 a.m. central time, CNN reported that the gunman had died. Police have not yet confirmed he is dead.

Three other suspects were also in custody, Dallas Police Chief David Brown said during a press conference before the standoff’s end. He said police were also investigating a suspicious package left near the site of the shootings.

“The suspect that we are in negotiation with that has exchanged gunfire with us over the last 45 minutes has told our negotiators that ‘The end is coming’ and he is going to hurt and kill more of us, meaning law enforcement, and that there are bombs all over the place in this garage and downtown,” Brown said.

During the press conference, Brown said he wasn’t sure if there were more suspects at large. “We still don’t have a complete comfort level that we have all the suspects,” he said.

The police chief said he was also unsure of the motive for the mass shooting, which was the worst attack on law enforcement since 9/11.

Brown said he believed the four suspects were “working together with rifles triangulated at elevated positions at different points in the downtown area, where the march ended up going.”

He said it was unclear if the suspects were somehow connected to the protest, but added that detectives were investigating that possibility.

“I believe I speak for every single American when I say we are horrified over these events,” Obama said.

He called on Americans to “profess our profound gratitude to the men and women in blue” and to remember the victims, in particular.

“Today, our focus is on the victims and their families,” Obama said. “They are heartbroken. The entire city of Dallas is grieving. Police across America, a tight-knit family, feels this loss to their core.”

On a night that began with a protest criticizing police, the chief praised the heroism of his officers.

“I’ve never been more proud of [being] a police officer and being a part of this great, noble profession, seeing the courage, the professionalism and just grit to stay on scene, looking for suspects, knowing that we are vulnerable,” he said during the press conference. Brown said officers had run toward gunfire to help one another and civilians.

Several people said officers helped save them, including one man who said an officer pushed him out of the way as shooting began. Bystanders captured footage of cops dragging fallen comrades out of the line of fire. Cameras also captured police officers choking back tears for their fallen colleagues. One officer appeared to brace himself against his SUV as grief overcame him.

“So many stories of great courage,” Brown said.

Mayor Mike Rawlings said it was “a heartbreaking morning” and called for unity.

“We as a city, we as a country, must come together and lock arms and heal the wounds we all feel,” he said.

The incident came on a night when protests raged nationwide over the fatal police-involved shootings of two black men earlier in the week.

On Tuesday morning, Alton Sterling was fatally shot by police in Baton Rouge. Less than 48 hours later, Philando Castile was fatally shot by an officer in Minnesota. Video footage of the killings or their aftermath spread quickly on social media, spurring widespread anger and renewing a debate over race and police departments’ use of deadly force.

As in other cities across the country, protesters gathered in downtown Dallas just before 7 p.m. for a march from Belo Garden Park to the Old Red Courthouse.

Just a few blocks from the spot of the infamous shooting, another was about to begin.

As dusk settled over the city, bullets suddenly began flying, the crack of high-powered ammunition cannoning off of skyscrapers and across downtown Dallas.

Terrified protesters scattered in all directions as startled cops gazed up in search of the origin of the shots.

Lynn Mays said he was standing on Lamar Street when the shooting began.

“All of a sudden we started hearing gunshots out of nowhere,” he told the Dallas Morning News. “At first we couldn’t identify it because we weren’t expecting it, then we started hearing more, rapid fire. One police officer who was standing there pushed me out the way because it was coming our direction . . . next thing you know we heard ‘officer down.'”

“And that’s where the war began.”

The shooting appears to have been heaviest around El Centro College, near Market and Main Street.

Protesters who had come to speak out against violence by police now suddenly found themselves in the crosshairs of violence apparently aimed at police.

Renee Sifflet, a mother of three teenagers who attended the rally and march, said she lost track of one of her children during the ensuing chaos.

“I brought them here for a positive experience, something they could say they were part of when they’re older, ” she told the Dallas Morning News. “Then it turned negative.”

Robert Rodriguez, 30, was passing through Dallas with his 14-year-old son. They weren’t part of the protest but happened to be passing by it with the windows down when they heard four shots ring out. There was a pause and then a continuous volley for many seconds.

Bullets sparked off of DART train tracks and smacked into walls of buildings behind their Yukon Denali, Rodriguez said. He circled the block and saw gunman dressed in camouflage, firing a long gun from his hip at officers. Officers crouched by a building returned fire. One cop car screeched to a halt and its driver started firing as he stepped out.

The gunman didn’t appear to be hit because he continued to run and fire, Rodriguez said. He then turned another corner away from gun battle.

“It was very intense,” he said. “My only thought was to get somewhere safe and get my son out of the line of fire.”

He said he saw a wounded female officer walking down the street holding her arm, being supported by another officer.

Stanley Brown, 19, was downtown near El Centro when the shooting began.

Brown ran around the corner of a building to take cover, only to see a gunman running up the street.

“He was ducking and dodging and when police approached he ducked into El Centro,” he said. He saw a SWAT team rush the college building, enabling five people to escape.

“An officer looked back at us and yelled that it was a terrorist attack,” he said.

At least one protester, identified as 37-year-old Shetamia Taylor, was shot at the rally.

Her sister said Taylor was at the protests Thursday night with her four sons. Theresa Williams told the AP that when the shooting began, Taylor threw herself over her sons. She was shot in the calf and underwent surgery early Friday. Williams also said two of Taylor’s sons became separated from their mother in the stampede for safety but were later reunited.

While most protesters ran for cover, a few turned their cameras from the demonstration to the chaos unfolding around them.

One man, identified as Michael Kevin, got so close to the El Centro parking garage, where much of the shooting took place, that officers ordered him to move back.

In perhaps the most shocking footage to emerge on the horrific and highly televised night, a gunman was filmed sneaking up behind a police officer and shooting the cop several times in the back at point-blank range. It is unclear if the officer survived.

“It looked like an execution honestly,” Ismael DeJesus, who took the video from an apartment building, told CNN. DeJesus said he thought the gunman, who carried an assault-style rifle, was wearing body armor as he appeared to get shot and keep going.

The gunman then holed up inside of El Centro’s garage, according to police. Dozens of cop cars surrounded the building as officers crouched behind their vehicles.

As he engaged in a shootout with officers, police took three other suspects into custody.

Two suspects were seen climbing into a black Mercedes with a camouflage bag before speeding off. They were apprehended in the Oak Cliff area, a suburb of Dallas.

The third suspect, a woman, was taken into custody near the El Centro garage.

Chief Brown said the three suspects were being interrogated but, as of 12:30 a.m. local time, had not provided information on the motive behind the brazen attack.

Even as Brown spoke to reporters, the fourth suspect was engaged in a standoff with police.

At around 1:26 a.m., there was “a loud boom and what sounded like shattering glass” near El Centro, according to Dallas Morning News reporter Robert Wilonsky.

At around 4 a.m. local time, CNN reported that the gunman holed up inside the garage was dead. Police have not yet confirmed the death and details remained murky Friday morning.

As the violence appeared to be winding down early Friday morning, the toll of the carnage was only beginning to emerge.

One thing that was clear, however, was the high cost on law enforcement.

Only one of the killed police officers had been identified as of early Friday morning. DART identified its fallen officer as 43-year-old Brent Thompson. He joined the agency in 2009 and was the first DART officer killed in the line of duty, according to a tweet.

“As you can imagine, our hearts are broken,” the agency said in a statement. “We are grateful to report the three other DART police officers shot during the protest are expected to recover from their injuries.”

Tela Strickland, McBride’s 14-year-old cousin, reacted with “shock” to news that her relative was among the injured.

“I am so tired of seeing shootings in the news,” she said. “When you see your own family in the news, it’s heart breaking.”

Family members and friends of other victims took to social media to share updates.

Many said they were proud of the dead or injured officers.

Much of downtown Dallas would remain blocked off on Friday, Mayor Rawlings said during the press conference. He asked citizens to allow police officers to do their jobs.

“We’ve got to support our police force and [let them] do their job,” he said, “to make sure we get to the bottom and the root cause of all of this.”