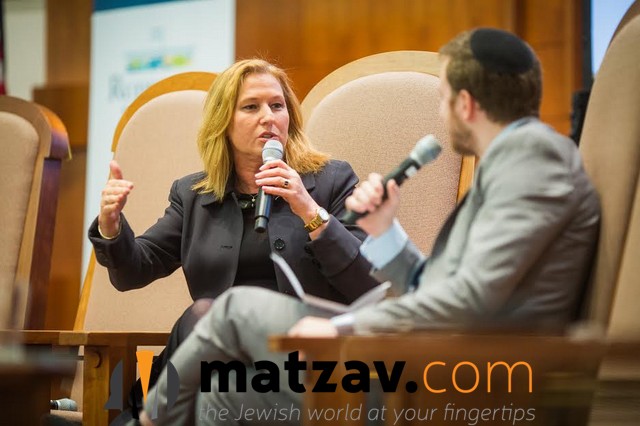 Former Israeli foreign minister Tzipi Livni spoke in strong defense of a two-state solution last night to a Boston audience of over 1,000 people in an open town hall event.

When asked, “93% of people in the Palestinian Territories hold anti-Semitic views according to an ADL poll. How do we make your vision a reality in this climate?”

Livni responded: “What is the suggestion? That we live with all of these anti-Semitic Palestinians in one state? No. The whole idea is to separate us from the Palestinians, to live in two states for two people.”

The town hall event was part of the Ruderman Knesset Mission, a week-long mission bringing Israeli parliament members to the US for a series of sessions and meetings with leaders, philanthropists, elected officials, students and the greater Jewish public to learn about a wide array of issues and concerns facing the American Jewish community and to strengthen the relationship between the two countries moving forward.

When asked by moderator Dovid Efune, Editor-in-Chief of Algemeiner, about the Boycott, Divestment and Sanctions (BDS) movement and the level anti-Semitism plays in the calls to boycott Israel, Livni responded: “There are some anti-Semitic parts of (the BDS movement) and there is nothing we can do to change their minds. (It is) not because of what we do, it’s because of who we are, and this is the common similarity between anti-Semitism and the BDS movement.”

Yesterday, the The Ruderman Family Foundation released a poll revealing that 33% of Israelis feel Donald Trump is the most pro-Israel US presidential candidate; Hillary Clinton was second with 31%; while Ted Cruz finished with 6% and Bernie Sanders, the only Jewish candidate, with 5%.

The following is a brief clip from last night’s event: