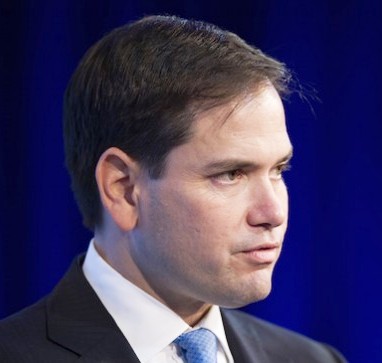 Manchester, N.H. – Marco Rubio came into New Hampshire with the hope of consolidating establishment Republican support behind him. He leaves with his campaign damaged, perhaps badly so.

After surging to a surprisingly strong finish in Iowa last week, Rubio was mired in fifth place with most of the results reported Tuesday night. Rubio was well back of winner Donald Trump and the second-place finisher, Ohio Gov. John Kasich, and was bunched behind Sen. Ted Cruz of Texas and former Florida governor Jeb Bush.

Rubio took the blame, saying that his poor Saturday debate performance, in which he repeated the same line about President Obama multiple times, cost him.

“Our disappointment tonight is not on you – it’s on me,” Rubio told supporters before the final results were in. “I did not do well on Saturday night, so listen to this: That will never happen again.”

Rubio’s mea culpa was a stark change of tone from that of the last couple of days, when he has insisted that he didn’t make a mistake in repeating lines about how Obama was damaging the country because they were true.

“I would pay them to keep running that clip, because that’s what I believe passionately,” he told ABC News on Sunday.

Republican donors who had been ebullient about Rubio after his stronger-than-expected performance in Iowa exchanged deflated messages Tuesday night.

The prevailing mood: gloom, laced with hope that Rubio could turn things around in South Carolina. His chastened comments played well and gave supporters optimism that the campaign would step it up. There were no signs of immediate defections amid his contributors, but there was a sense that he is entering do-or-die territory.

“I don’t think it’s over, but it’s certainly not good,” said one fundraiser for the campaign, who requested anonymity to speak candidly. “He’s got to do well in South Carolina. If he doesn’t beat Bush, it’s over.”

The Florida senator now heads to South Carolina aiming to do what he could not do in New Hampshire: turn the nomination battle into a three-way race between him, Cruz and Trump.

It won’t be easy. Trump and Cruz both have strong bases of support in South Carolina, and the Bush family has built a network there over many years. Kasich’s revived viability also complicates matters for Rubio.

Another challenge is that the focus for Rubio has shifted away from his inspirational life story to questions of leadership and experience – the terrain to which the trio of governors has been trying to take the discussion for some time.

That forum will give Rubio a chance to undo the damage from last Saturday night, when he repeated one of his talking points nearly verbatim three times, even as Christie was accusing him of doing little more than repeating talking points.

“For those of us who are old enough to remember vinyl records, it comes off as a skip,” said Fergus Cullen, a New Hampshire Republican strategist who said he was leaning toward Rubio at the beginning of the campaign but ended up supporting Kasich.

Rubio “reinforced the exact main doubts [voters] had about him to begin with,” Cullen added.

Rubio also wasn’t helped earlier in the week when former Pennsylvania senator Rick Santorum, who endorsed his former rival after dropping out of the race, struggled to name anything substantial that Rubio had accomplished in the Senate.

By Tuesday, a tense atmosphere had surrounded Rubio at polling places. At some, his backers scuffled with people who showed up dressed like robots – a reference to his robotic debate performance. And at one site in Windham, where Rubio went to make a final push, he was surrounded by a crush of photographers, videographers and reporters while supporters of several campaigns tried to outshout each other.

One voter complained directly to the senator, saying the crowd was forcing him to walk into the snow, and he did not like the chants of Rubio volunteers.

“They were yelling at us on the way in. We don’t like that in New Hampshire,” the man said. “I changed my vote.”

South Carolina presents an opportunity and a challenge for Rubio. National security is a top issue for many voters, and Rubio has put it at the center of his campaign. Rubio’s team is full of seasoned South Carolina operatives, such as campaign manager Terry Sullivan. Sullivan’s former business partner J. Warren Tompkins runs a pro-Rubio super PAC.

South Carolina’s Upstate region is heavy with Christian conservatives, whom Cruz has been aggressively courting for months. The low country is populated by more moderate, traditional Republicans who are less motivated by the culture wars.

But with Bush and Kasich showing no signs of bowing out after Tuesday, Rubio faces the daunting prospect of a center-right vote split that will enable Cruz and Trump to march to better showings in South Carolina.

Rubio’s strategists thought that finishing behind Kasich was preferable to trailing Bush. In Kasich, they see a candidate who lacks the infrastructure and donor base to compete in the next few states. Bush, however, has built a broader and better-funded operation.

Rubio strategists are now bracing for a campaign they think will come down to who can accumulate the most delegates in a race that could stretch on for months. They are aiming to survive the early nominating contests in good enough shape to compete March 15, when most states will begin to allocate delegates on a winner-take-all basis.

While Cruz has been positioning himself for months to do well during the “SEC primary” on March 1, Rubio’s team thinks there are states they can compete for on that day, such as Massachusetts and Minnesota. And they think that even if Cruz wins his home state of Texas that day, they can still pick up delegates on a proportional basis.