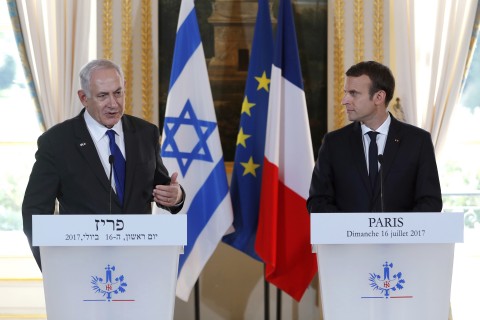 French President Emmanuel Macron has denounced his country’s collaboration in the Holocaust, lashing out at those who still downplay the French role in sending tens of thousands of Jews to death.

Commemorating 75 years since a mass roundup of French Jews outside of Paris, Macron insisted that “it was indeed France that organized this.” He said “not a single German” was directly involved, but French police collaborating with the Nazis.

Macron dismissed arguments by French far-right leaders that the collaborationist Vichy regime did not represent the French state, saying that is “convenient, but it is false.”
At a ceremony Sunday attended by Israeli Prime Minister Benjamin Netanyahu, Macron also pledged to fight continued anti-Semitism. He called for thorough investigation into the recent killing of a Parisian woman believed linked to anti-Jewish sentiment. Read more at Daily Mail.