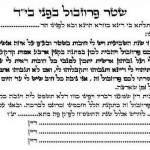 In Parshas Re’eh the Torah states, “At the end of seven years you shall institute a Shemittah (release)… Every creditor shall release his authority over what he has lent his fellow Jew;

he shall not press his fellow Jew…” (Devarim 15:1-2) Chazal (our Sages) explain that these words present us with two commandments. Firstly, there is a positive commandment to declare that we waive our right to collect any loans that were payable during the year of Shemittah. Secondly, the Torah commands us to refrain from demanding payment of those loans. Later on in the same passage (Devarim 15:9) the Torah obligates us in a third Shemittah commandment. There the Torah states that when making a decision whether to lend money, one is not allowed to take into account the possibility that Shemittah may release the loan. The concept that is formed by these three mitzvos is called Shemittas Kesafim, ‘the release of monies.’ Surprisingly, though the agricultural Shemittah only applies in the land of Israel, the mitzvos of Shemittas Kesafim are incumbent upon every Jew wherever he may find himself.

On the surface, our present observance of Shemittas Kesafim bears very little resemblance to that which the Torah describes. Unlike in olden times, today’s Jewish courts rarely, if ever, enforce the release of a loan due to Shemittah. The rabbinic enactment of the pruzbul, which is a main cause for this change, is often misunderstood. Unfortunately, the procedure of making a pruzbul leaves the onlooker with the feeling that he had just witnessed some kind of magic which somehow makes the mitzvah of Shemittas Kesafim disappear. The purpose of this article is to demystify this often poorly understood subject.

Due to the intervention of Chazal, Shemittas Kesafim as we know it today does not normally require any real financial loss. In fact, it has been that way since the times of Hillel the Elder, who was the leader of the generation that immediately preceded the destruction of the Second Temple. Hillel saw that the rich were refraining from lending to the poor because of a fear that their loans would be cancelled by Shemittah. In fact this behavior is exactly what the Torah prohibited in Devarim 15:9 as we have learned.

With his great wisdom, Hillel decided it would be best to minimize the damage. He devised a legal instrument which would, in effect, circumvent Shemittas Kesafim while at the same time maintain at least a semblance of adherence to its halachos. Hillel’s enactment saved the rich from flagrantly ignoring the prohibition of refusing to give a loan because of the fear of Shemittah. Now, they would be able to collect their money. Furthermore, Hillel’s innovation was also intended to help the poor by alleviating the difficulty they had in obtaining loans. Hillel called this new innovation a pruzbul, which is a shortened form of the Aramaic expression pruzbulti, ‘an enactment for the rich and the poor.’

How does Hillel’s pruzbul circumvent the laws of Shemittas Kesafim without abolishing them entirely? In order to accomplish this, Hillel used an existing halacha and then, with the authority that was given to him by the Torah, he extended it further, as will be explained.

According to the Torah, Shemittas Kesafim only applies to a loan in which payment is being demanded solely by the lender himself and not with the help of Bais Din, a Jewish court. If, however, the lender had already entrusted collection of the loan to Bais Din before the onset of Shemittas Kesafim, then that loan will not be subject to the laws of Shemitta. One explanation given for this halacha is that the Torah prohibition not to press a borrower for payment only refers to the lender himself but not to Bais Din.

Although this halacha does circumvent Shemittas Kesafim, widespread use of this loophole would prove quite impractical. This is due to the fact that the only legally recognized method by which a lender entrusts Bais Din to collect the debt owed to him is by physically giving his loan document to Bais Din. Typically, a lender would think twice before he relinquishes control of his loan document to anyone, including Bais Din.

The halachic innovation of the pruzbul was to allow the lender to make a verbal declaration in front of Bais Din or in front of two witnesses in which he states that he entrusts Bais Din to collect his debts for him. This would take the place of actually giving documents to Bais Din. In fact, Hillel went so far as to empower a pruzbul declaration with the ability to entrust a loan even when no loan document was written at all. This declaration must also be written down and signed by the three judges that comprise the Bais Din or, alternatively, by the two witnesses who hear his declaration. There is a difference of opinion regarding the validity of a pruzbul that was made by verbal declaration but was not written down.

By what authority did Hillel make this enactment? This is an especially troublesome question in light of the Ramban’s understanding that Shemittas Kesafim is always a Torah obligation. According to that opinion, Hillel’s pruzbul is a direct contradiction to the Torah! The Talmud asks this question. According to the Ramban, the Talmud answers that with regard to monetary matters, the Torah itself empowers the Jewish court with the authority to seize the assets of one individual and give them to another if the court has a legitimate reason to do so. The expression used by the Talmud to describe this power is hefker Bais Din hefker – property declared ownerless by Bais Din becomes ownerless property. In effect, this is what Hillel did when he enacted the pruzbul.

Thus, although the pruzbul does seem to be a ‘legal fiction’ created by some ’rabbinic magic,’ in truth it is not fiction or magic at all. The pruzbul is not an example of a rabbinical abrogation of the Torah, chas v’shalom. Rather, it is an example of the use of a legitimate power invested in the Sages by the very Torah that they strive to uphold. In addition, one should understand that the power of hefker Bais Din hefker was meant by the Torah to be used sparingly and with clearly defined guidelines. In the entire Talmud one can find very few instances where the Sages invoked the power of hefker Beis Din hefker to effect change. From that fact, it would seem that this power was not intended by the Torah to be a ‘magic bullet’ which can be aimed at every social problem.

It is true. The Rabbis do have broad, far-reaching powers to effect halachic change, but they were directed by the Torah to use those powers in only very limited situations. Furthermore, today’s Jewish courts do not apply hefker Bais Din hefker to situations where no precedence for such action is found in the Talmud. So, if we are looking to fix that which is wrong with today’s society, hefker Bais Din hefker is not going to be the solution. Instead, we had better look to our own powers to change our attitudes and actions. That is the kind of change the Torah wants from us anyway