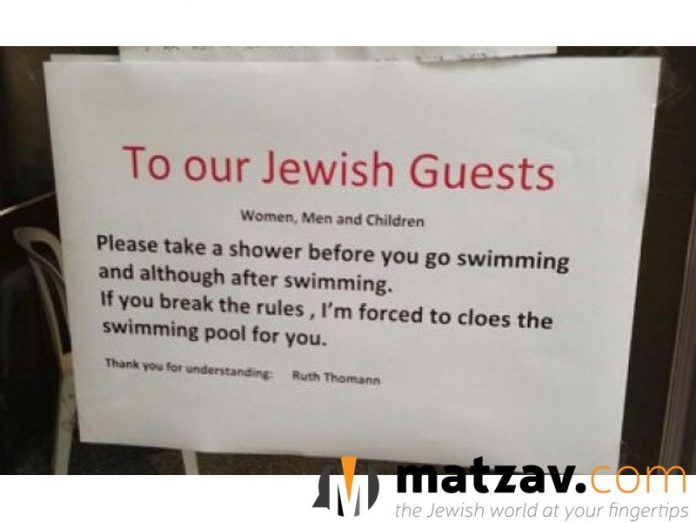 Travel industry giants moved quickly on Thursday to distance themselves from a hotel in the Swiss Alps accused of discriminating against Jewish guests over access to its swimming pool and kitchen areas.

After the revelation on Monday that Ruth Thomann — the owner of the Paradies hotel in the Alpine resort of Arosa — had placed signs specifying that “Jewish guests” needed to shower before entering the swimming pool and could access the kitchen refrigerator where kosher food is stored for just two hours each day, vacation and travel websites began removing the hotels’ listing.

Booking.com – which regularly ranks at number one in rankings of travel sites — said it was removing the Paradies from its listings. “We do not tolerate discrimination of any kind,” a spokeswoman for the site said. “We can confirm that the property in question is no longer available on Booking.com.”

Attempts to make a booking at the Paradies through Priceline.com, another popular site, were met with the automatic response that “The hotel you requested is unavailable, however here are others you may like.” The Paradies is also now absent from a comprehensive list of hotels in and around Arosa available on Expedia.com.

Shimon Samuels — the international affairs director of the Simon Wiesenthal Center who alerted Booking.com CEO Gillian Tans to Thomann’s actions — praised “a path-breaking step against discrimination by the travel industry.”

“We are very familiar with the indiscriminate welcome and hospitality of hotels in the region, and know what shame such incidents as this case in Arosa bring to them,” Samuels told The Algemeiner on Thursday.

“Bigots probe the first line of prejudice appeasement,” Samuels observed. “Unless publicly condemned and penalized, its acceptability will spread exponentially.”

“No matter whom the target — Jews, Muslims, Roma, the LGBTQ community — our reaction would have been the same,” Samuels continued.

In an interview with The Algemeiner on Monday, Thomann conceded that she had “used the wrong words” in placing the signs. Asked if she understood why such signs are deeply offensive, Thomann responded, “I can understand, but I will have lots of Jewish guests next year.”