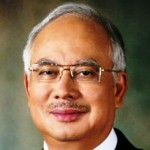 In his address to the U.N. General Assembly on Thursday, which followed a dramatic speech by Israeli Prime Minister Benjamin Netanyahu, the leader of Malaysia invoked Judaism to attack the Jewish state.

Before turning his attention to Israel, however, Prime Minister Najib Razak urged the nations of the world to “spread awareness of authentic Islam. Most especially when conflicts persist and people lose hope. For it is there that extremism finds fertile soil. And those who fight for extremism — for a perversion of true Islam — are one of the main drivers of the current migration crisis from the Middle East.”

Razak devoted a good portion of his time at the podium to deploring the rise and methods of ISIS.

“Non-state actors, such as the so-called Islamic State, threaten to destroy sovereign states,” he said. “They don’t confine their horrific acts of cruelty within official boundaries. Expert at using social media to recruit followers in faraway countries, they lure them with false promises, persuading many young people that their barbaric actions will bring them closer to God. It is sickening, and there could be no greater a slur on Islam — a religion of peace, moderation and justice.”

He then proceeded to talk about the plight of the Palestinians.

Forward-thinking leaders put their people’s interests first. Similar courage… is needed to permanently address the injustice suffered by the Palestinians since 1948.

If the world continues to turn a blind eye to their sufferings, we risk another catastrophe in the Occupied Palestinian Territory. We will also fail to uphold the right to self-determination, which was at the very basis of the United Nations when it was created 70 years ago.

On that note, given the Rosh Hashanah violations of Al-Aqsa Mosque in Jerusalem and aggression against its worshipers three weeks ago, I call on the Israeli government to live up to Judaism’s highest ethical principles, and the essential message of the Torah as succinctly expressed by the first century BC sage Hillel. When asked to describe the Torah in a soundbite, he said, ‘That which is hateful to you, don’t do to your fellow human being.’

This dictum, known universally in all religions as the Golden Rule, could herald the dawn of a much needed revised relationship between Muslims and Jews.