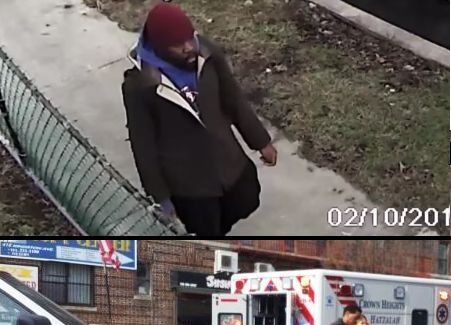 COLLIVE reports: Just hours before an event is to take place to update the community on progress on the investigation into a recent violent stabbing, the NYPD announced that they have made an arrest in the case, COLLIVE reports.

The New York Police Department and the Brooklyn District Attorney’s Office have announced they are moving forward with charging a man with the stabbings of at least 3 people – including a Jewish man in Crown Heights.

Community activist Chanina Sperlin told COLlive.com he received the notice about the case this afternoon from James O’Neill, the NYPD’s Chief of Department.

“The person they are charging is an African-American male who was involved in the stabbing of 2 people on Flatbush Avenue and Nostrand on Wednesday,” Sperlin said.

COLLIVE reports that police sources identified the man as 26-year-old Kenny Raschelin. He was charged with attempted murder and aggravated harassment as a hate crime in connection with the stabbing of 25-year-old Brikman on Empire Blvd. in Crown Heights on February 10. “They will be charging him for yesterday’s stabbing and Brikman’s stabbing,” Sperlin said.

“I hope the DA will stay strong and give this man a very strong prosecution so that this don’t happen again in Crown Heights or anywhere else in the city,” said Sperlin, who is the intergovernmental liaison for the Crown Heights Jewish Community Council.

It appears to be that the man being charged now is not the same man the police originally suspected and claimed to have identified.

COLLIVE reports that the Brikman and Katz families, relatives of both recent victims, are requesting the community show up to participate in the event tonight and show a united community in the concern for the safety and security of our neighborhood.

The event will take place tonight, Thursday at the Jewish Children’s Museum at 7:00 pm.