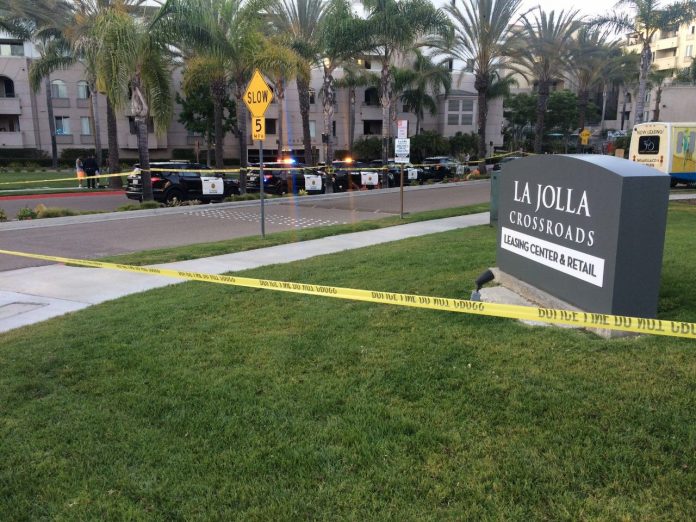 A gunman opened fire at an apartment complex swimming pool in San Diego Sunday evening, killing one person and injuring seven others before being fatally shot by officers, police said.

The gunman, identified as Peter Selis, was pronounced dead on the scene. Police described him as a white male who may have lived in one of the buildings, and said all of the victims were African American or Hispanic. Police said they did not know if race was a factor in the attack.

Officers responded to reports of a shooting around 6 p.m. at the upscale La Jolla Crossroads apartments in San Diego’s University City neighborhood, where about 30 people had gathered for a birthday party at the pool.

A police helicopter arrived on the scene first and reported seeing a suspect armed with a handgun, surrounded by “numerous victims,” San Diego Police Chief Shelley Zimmerman said in a news conference. The pilot watched the suspect reload his weapon once and open fire again on the partygoers, she said.

A witness who saw the chaos from his apartment window said the shooter appeared calm as his victims struggled on the ground in front of him.

“We could see the shooter sitting there with a beer in one hand and a gun in the other,” the witness, who was not identified, told ABC 10.

A sergeant and two officers arrived and cornered the suspect in the pool area. The suspect pointed a large caliber handgun at them, and all three opened fire, killing him, Zimmerman said. She added that the suspect may have fired at police first.

Zimmerman said it was too early in the investigation to pinpoint a motive. Police were still interviewing witnesses and had not yet spoken at length with the three officers who opened fire, she said.

“Our hearts go out to the victims,” she said. “There’s a lot of work to be done.”