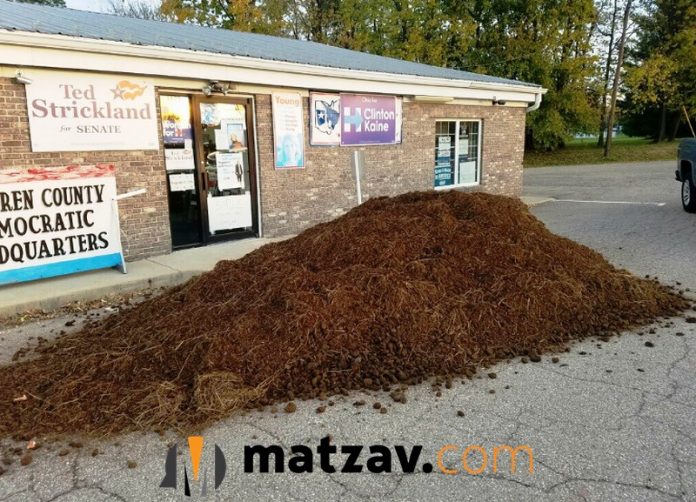 For those who think this election season can’t get worse, we bring you to Warren County, Ohio, where a large truckload of manure was dumped in front of Warren County Democratic Party headquarters in Lebanon, about 35 miles northeast of Cincinnati.

A sheriff’s deputy was the first to notice the pile and alerted office leaders of it about 8 a.m. on Shabbos, local party officials told The Washington Post.

If any of this sounds or looks familiar, it may be because a similar dump occurred at the same offices in 2012. Nobody was ever caught after that incident.

“At the time, we did not have a camera system, because it kind of caught us by surprise,” Bethe Goldenfield, chairwoman of the Warren County Democratic Party, said of the 2012 dump. “We didn’t think something like that would happen.”

This time, the act was caught on surveillance video that the Warren County Sheriff’s Office is now reviewing, Goldenfield said. She did not want to elaborate on what the cameras captured because it was an open investigation, but she noted that it involved a dump truck.

“And I’m not going to jump to the conclusion that it was the same person [as in 2012], but of course that crossed my mind,” Goldenfield said. “We just need to have a little more specifics, and then hopefully we’ll bring the perpetrators to be accountable.”

Jeff Monroe, chairman of the Warren County Republican Party, told Cincinnati.com that the GOP had nothing to do with the incident and offered to help clean up the manure.

The pile was about 15 to 20 feet wide and about 3 feet tall at its peak, Goldenfield estimated. Most of it was cleared early Saturday afternoon by volunteers and a contractor the office hired to haul away the manure, she said.

The pile was so high that it nearly covered up a sign on the entrance to the building that read, “Smile you’re on camera.” On Saturday morning, the only word visible from behind the peak of the manure was the word “smile.”

“We had offers from all over — people wanting to help clean it up — and a lot of Dems were asking if they could reuse it, to their credit,” said David Pepper, chairman of the Ohio Democratic Party, who tweeted after learning of the incident: “When they dump manure, we go high!”

“All kidding aside, obviously it’s sad to see people engage in that kind of behavior,” he said.

Warren County is a large and fast-growing county that encompasses much of the area between Cincinnati and Dayton. In has for many years been a Republican stronghold that has not elected a Democrat to even a county-level office since 1976.

In 2012, nearly 69 percent of Warren County residents voted for Republican candidate Mitt Romney, compared with about 30 percent for President Obama, according to the county’s Board of Elections.

“This is a very red county where Democrats have gotten very organized, and I think this is sort of frustration at that,” Pepper said. “If you’re a Republican [and] if you’re going to win Ohio, you need to win a place like Warren County. This is where you run up the margins to counteract what’s going to happen in Cincinnati and Cleveland and Columbus.”

Voters in Ohio, a crucial battleground state, have picked the winning candidate in all election cycles since 1972. In 2012, Ohio voters elected Obama with 51 percent of the vote. Clinton and Trump are currently virtually tied in the state, both with nearly 47 percent of the votes, according to a compilation of dozens of polls by FiveThirtyEight.com.

Neither Goldenfield nor Pepper could think of anything specific that may have prompted the manure dump. Goldenfield said their Democratic office has some of the most active volunteers in the state, and although they do not expect to turn the county blue, “we’re focused on getting our people out to vote.”

“We’re quite organized. We’re quite motivated. That probably is something that they don’t like,” Goldenfield said, referring to whoever dumped the manure. “It did happen in ’12 so we can’t say that it’s just about Mr. Trump … but I do think Mr. Trump [and] his vitriol has infected the public domain.”

“This is not anything that will detract us from our goal, so it will just allow us to continue to work harder,” Goldenfield said. “In a county like this, we’re used to being in a minority, so we just take these things in stride and move on.”