On Holocaust Memorial Day (Yom Hashoah) on May 2, under the theme “Say No to Anti-Semitism,” more than 10,000 Jewish and non-Jewish youth from 40 different countries, together with dozens of Holocaust survivors and dignitaries from around the world, participated in the 31st annual International March of the Living to pay tribute to all victims of the Holocaust and call for an end to anti-Semitism.

A delegation of U.S. ambassadors and White House representatives, headed by U.S. Ambassador to Israel David Friedman, and a distinguished delegation honoring Greek Jewry, which was almost completely annihilated by the Nazis and their collaborators, headed by Ecumenical Patriarch Bartholomew I, Archbishop of Constantinople and the Speaker of the Greek Parliament, Nikos Voutsis, joined the thousands of international participants on the two-mile walk from Auschwitz to Birkenau.

“In taking part in the March of the Living, you are marching at a time when a growing wave of anti-Semitism is yet again sweeping the world. But in truth, anti-Semitism never really disappeared; it simply lay barely hidden under the surface waiting for the right time to strike again. And strike it did—in deadly fashion—at the [Tree of Life] synagogue in Pittsburgh last year, and just a few days ago, on the last day of Passover, at the Chabad synagogue in Poway,” said Dr. Shmuel Rosenman, founder and co-chairman of the March of the Living, while addressing the participants just prior to the march.

“But today, on Yom Hashoah, we gather together in Auschwitz to mourn our 6 million ancestors, a third of the entire Jewish people, who were murdered in the most unprecedented genocide in history. Today, we proclaim to our enemies with a loud and clear voice: We shall not be defeated! We will return here year after year to raise our voices against anti-Semitism and, indeed, against all forms of racism and hatred. As a survivor of Auschwitz once said, the only one thing worse than Auschwitz is if the world ever forgets that there was an Auschwitz. We promise to never allow that to happen.” 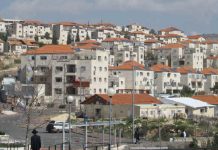