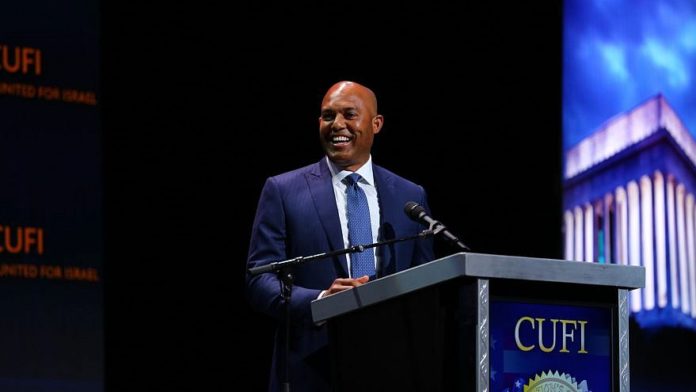 On July 21, New York Yankees icon Mariano Rivera, 49, will be inducted into the Baseball Hall of Fame as the first player to be unanimouslypicked.

This week, he was in Washington, D.C., for the annual summit by Christians United for Israel, where he was a speaker.

Rivera, who holds the Major League Baseball record for most career saves, has been to Israel twice: in 2015 and 2018.

JNS talked with Rivera in person. The interview has been edited for brevity and clarity.

Q: Tell us about Israel and why you are such an advocate, especially having traveled to Israel last year.

A: The experience that I had in Israel just speaks volumes in it of itself. The experience that I had there, it was amazing. There are no words to describe what I experienced, what I felt. […] was a Christian. He was Jewish. He fulfilled the Old Testament. When it comes to that he did everything as a Jew, I love that. I understand that, as my Savior, the Bible speaks about Israel and the Jews. And that’s his people.

Q: Did you ever witness anti-Semitism growing up in Panama?

Q: What is your reaction to Guatemala, Honduras and Brazil forging ties with Israel?

A: To me, that’s a great decision. Hopefully, Honduras and Brazil will move their embassy to Jerusalem, where they belong. Being friends with Israel is a smart decision.

Q: Israel’s baseball team made a remarkable run in the 2017 World Baseball Classic. Were you able to meet with the team during your visit?

A: I didn’t have the chance to meet with them, but they made a remarkable run, great games. I was cheering for them. All the principles and fundamentals that they have is based on the Bible; that’s what they believe. That’s why I’m always in tune with that.

Q: Does Major League Baseball have a role in recruiting players from Israel? Does the league have a role in the U.S.-Israel relationship, considering baseball’s international appeal?

A: I can’t answer that question because I’m not in MLB anymore. But at the same time, I hope that if they don’t, they will because they’re recruiting players also, so having that great relationship with Israel would be smart so they can bring the game to Israel and recruit more players from Israel.

Q: You were the closer of a team in one of the heavily Jewish populated places in the world. What were your interactions with the Jewish and pro-Israel community there?

A: My interaction with the Jewish community in New York? I have great friends, rabbis, friends who are Jewish that are amazing, beautiful people.

I went to Israel with a few friends of mine that are rabbis; to me, that was fascinating. We had a great time, and we’re working to do it again. That’s how powerful it was. Most of them were from New York.

The trip was to go to Israel and understand what Israel is all about—what is our G-d and just the people in general. How wonderful it was.

I believe that part of me is Jewish. I have to take a DNA test to see where my family came from, where I come from—all that stuff because I truly believe there’s something in me that just moves me to have something special for the Jewish community and Israel.

Q: What are your thoughts on the current baseball season? The Yankees are on a roll.

A: The Yankees are on quite a roll. Hopefully, they continue winning. My prayers are that they go all the way.

Q: Is there anything else our readers should know about you?

A: You want to know more about Israel, come to Israel. Visit Israel. It’s a place like no other. It doesn’t matter what kind of religion you are, if you are religious or not. Just come and see with your own eyes to understand what it is all about. That is the best thing that I can say. Before you make a comment, you need to go there and find out.