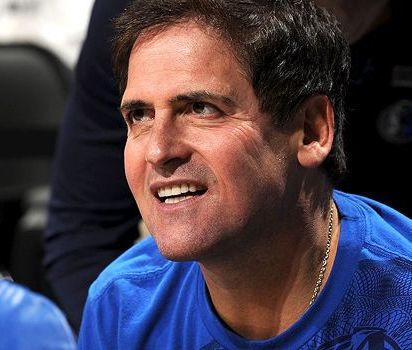 Imagine: Dallas Mavericks owner Mark Cuban one heartbeat away from the presidency.

The billionaire who also happens to have a reality show says he would listen if either Hillary Clinton or Donald Trump, the presumptive nominees, approached him.

“Absolutely,” Cuban replied when Chuck Todd asked him about running with Clinton on Sunday’s “Meet the Press.” “But the key would be she’d have to go more to the center. I like the fact that Senator Clinton has thought-out proposals. That’s a good thing because at least we get to see exactly where she stands. But I think that Senator [Bernie] Sanders has dragged her too far to the left.”

Clinton’s response? “I think we should look widely and broadly. It’s not just people in elected office. It is successful businesspeople,” Clinton told Todd. “I am very interested in that and I appreciate his openness to it.”

Cuban, who described himself as “fiercely independent,” called Trump a friend and said he would listen to him, too, about being on his ticket. However, he wants to press him for his position on specific issues.

“If he asked me, I’d be like, ‘Okay, Donald. That’s great. Let’s talk about it. But we’re both going to have to dig in and really look and understand the issues so we can come up with solutions.’ ”

A week ago, Cuban told The Washington Post that a group of conservative politicians had asked him to run as a third-party candidate.

“I don’t see it happening,” Cuban wrote in an email.