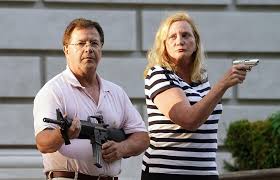 Mark McCloskey, who stood armed with an AR-15 outside of his St. Louis home to confront Black Lives Matter protesters in June 2020, said he is considering a bid for U.S. Senate in Missouri.

Running for the seat, which retiring Republican Sen. Roy Blunt will vacate in 2022, is “a consideration,” McCloskey said. A run for the Republican nomination would put him up against Missouri Attorney General Eric Schmitt and former Missouri Gov. Eric Greitens, who resigned the governorship on May 29, 2018, amid a scandal.

McCloskey, who confirmed his run to Politico, and his wife, both attorneys in St. Louis, gained attention after images were spread of the two standing armed outside of their home June 28, 2020, confronting Black Lives Matter protesters who had entered their private neighborhood.