6:20 p.m. [We apologize for our site crashing temporarily due to heavy traffic.] The State of Florida has executed 45-year-old Martin Edward Grossman, who was convicted of killing a state wildlife officer during the 1980s. Governor Charlie Crist’s office said Grossman died at 6:17 p.m. today at Florida State Prison.

He was convicted of first-degree murder in the death of Margaret “Peggy” Park, a Florida wildlife officer who was shot with her own gun in 1984.

Grossman was the 69th person executed in Florida since the death penalty was reinstated in the sunshine state in 1979. He was the 25th by lethal injection, the fifth executed under Governor Crist and the first in 2010.

Park’s family traveled from Ohio to witness the execution.

Grossman was calm and resigned to his fate before th execution. He met with his aunt and two friends in the morning and then with a rabbi for a final prayer session in the afternoon.

Although Grossman initially ordered peanut butter and banana cookies from the canteen with an ice tea, he added a chicken sandwich and substituted fruit punch. He finished the entire last meal.

The media gathered outside the gates of the Florida State Prison this afternoon. At 5 p.m., the media witnesses were escorted into the prison, bringing nothing but a photo I.D.  The prison supplied pencil and paper for notes.

After sitting and waiting for about a half hour to 45 minutes, witnesses were then escorted in to the death chamber. The curtains were opened and Grossman was about 15 feet away on the other side of a glass wall.

He made a final statement expressing his remorse.

Jew around the world wrote to Governor Crist, asking him for a 60-day stay of execution for Mr. Grossman, but the Governor ignored the requests to allow Grossman to repay his debt to society by serving the rest of his life in prison.

Separately, 200 organizations, Jewish and non-Jewish, sent Governor Crist a petition requesting the stay of the execution, in order to properly file an official request for clemency.

May Mr. Grossman rest in peace. Funeral details will be posted when they become available. 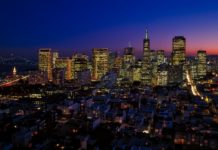 BIDEN’S AMERICA: San Francisco Homeless Hotels May Be Covered By Taxpayers Through Sept.