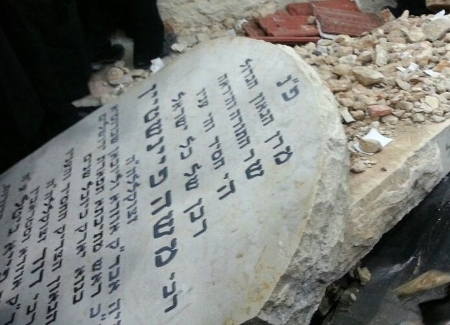 Large crowds of Yidden gathered today on Har Hamenuchos to mark the yahrtzeit of the Belzer Rebbe, Rav Aharon Rokeach zt”l. Unfortunately, due to the large number of people in the area of Har Hamenuchos where the Rebbe’s kever is located, the nearby kever of the posek hador and rabbon shel kol bnei hagolah, Maran Rav Moshe Feinstein zt”l, became damaged, with the tombstone collapsing, as seen in the photo here.

Onlookers expressed shock at the inadvertent desecration of the matzeivah. Efforts are already underway to restore the matzeivah once the large crowds disperse.

In other news, the Belzer Rebbe will conduct a yahrtzeit tish this evening, to be held in conjunction with the tenaim in honor of the engagement of his eldest granddaughter, a daughter of his only son, Rav Aharon Mordechai Rokeach.