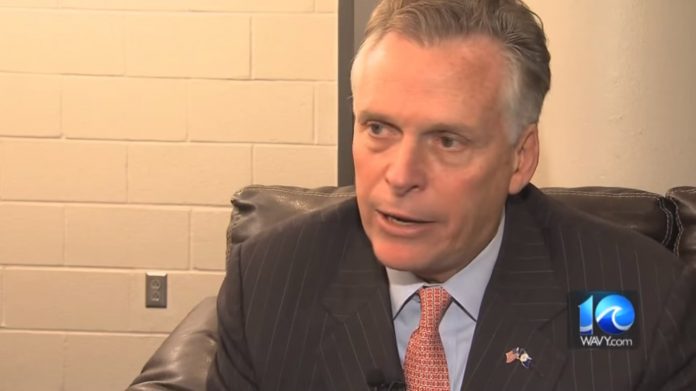 Virginia Gov. Terry McAuliffe has illegally granted voting rights to 60,000 convicted felons in the key swing state of Virginia, a move that could give Hillary Clinton a victory in that state—and possibly the White House—unless supporters of Donald Trump get out to the polls on Election Day, BREITBART reports.

Like many states, the Virginia Constitution provides that if a person commits a felony, with their lawbreaking, they forfeit the right to vote for candidates who will make and enforce those laws. But it also grants the Virginia governor clemency power to pardon criminals and commute sentences, including the power to restore voting rights.

But Gov. Terry McAuliffe—one of Hillary Clinton’s oldest and most loyal supporters—declared on April 22 of this year that he was using this pardon power to restore voting rights to 206,000 convicted felons in Virginia. This was a political bombshell, because felons vote overwhelmingly in favor of Democrats, and Virginia is a swing state (made all the more so by Clinton’s tapping Sen. Tim Kaine from that state as her running mate).

Virginia lawmakers sued, and the Virginia Supreme Court held in Howell v. McAuliffe that the Clinton ally’s political move was an unprecedented power grab that previous governors of both parties had acknowledged was illegal.

Among other things, Virginia Chief Justice Donald Lemons wrote that “power could be exercised only in particular cases to named individuals for whom a specific grant of executive clemency is sought,” and only after an individualized assessment of the felon’s case and character. Read more at BREITBART.