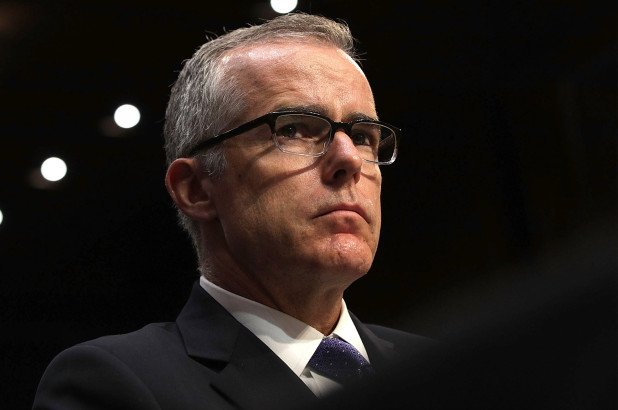 Former FBI Deputy Director Andrew McCabe on Thursday launched an online fundraiser to help cover the legal costs that might come as he navigates investigations and congressional inquiries and explores whether he will sue over his abrupt ouster from the bureau.

Attorney General Jeff Sessions fired McCabe from the bureau about two weeks ago, ending his more than 20-year career just 26 hours before McCabe could retire and begin collecting his full retirement benefits. The move is likely to cut into his pension, though McCabe’s team said money raised for the legal defense fund will not be used “for anything beyond his defense of the allegations against him.”

“He will continue to fight for the pension and benefits he deserves, rather than accept any crowdfunding for that purpose,” his team wrote on his GoFundMe page. His team said that after any legal proceedings were over, whatever remained in the fund would be donated to charity. Soon after McCabe’s firing, his team noted that there were a number of crowdfunding sites claiming to be raising money in his name, but none was affiliated with him.

“Unfortunately, the need for a legal-defense fund is a growing reality,” his team wrote Thursday.

Sessions said he fired McCabe over findings from the Justice Department inspector general that McCabe had authorized an inappropriate disclosure to the media, then allegedly misled investigators about it. The FBI’s Office of Professional Responsibility had recommended the termination.

But McCabe, who disputes the inspector general’s conclusions, shot back that his firing was politically motivated, meant to undermine the FBI and its high-profile investigation into whether the Trump campaign coordinated with Russia to influence the 2016 election. President Donald Trump had openly attacked McCabe over donations his wife, who ran as a Democrat for a Virginia state senate seat, took from a political action committee of Terry McAuliffe, an ally of Hillary Clinton.

After McCabe was fired, Trump tweeted: “Andrew McCabe FIRED, a great day for the hard working men and women of the FBI – A great day for Democracy. Sanctimonious James Comey was his boss and made McCabe look like a choirboy. He knew all about the lies and corruption going on at the highest levels of the FBI!”

The Justice Department inspector general has yet to release his report on McCabe – leading some to speculate that he has asked federal prosecutors to look into the matter to see whether criminal charges are appropriate. Lying to federal investigators is a crime to which several Trump aides have pleaded guilty.

Even without criminal proceedings, though, McCabe is likely to face inquiries from Congress that will require a lawyer to respond, and he is weighing whether to file a lawsuit over his termination. He is being represented by lawyer Michael Bromwich, who wrote on Twitter on Thursday: “In 38 years as a lawyer and 24 years in private practice, I have rarely seen the kind of support Andy McCabe is getting. He got a raw deal and people know it. He deeply appreciates the support.”