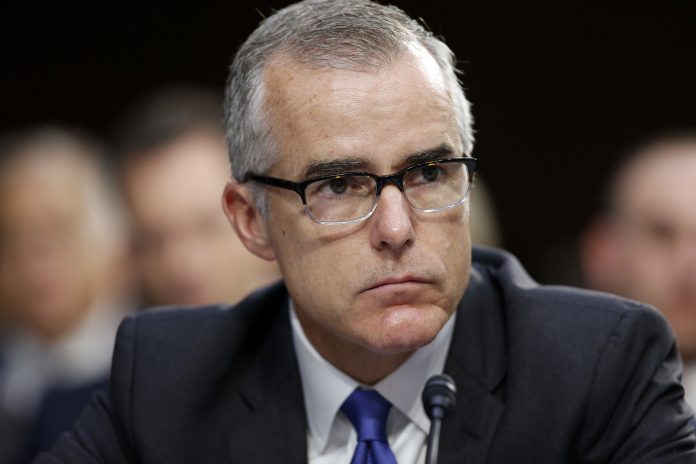 Former acting FBI Director Andrew McCabe said Tuesday that officials briefed a bipartisan group of lawmakers after the bureau opened an investigation into President Donald Trump in May 2017, and that no one in the room pushed back.

“That’s the important part here, Savannah,” McCabe said in an interview with Savannah Guthrie on NBC’s “Today” show. “No one objected. Not on legal grounds, not on constitutional grounds and not based on the facts.”

The comments seemed designed to rebut criticism that McCabe has faced from Trump and other Republicans for initiating the investigation into Trump and participating in conversations about other, more dramatic steps against the president. McCabe told CBS’ “60 Minutes” over the weekend that Deputy Attorney General Rod Rosenstein talked with him about wearing a wire to surreptitiously record the president, or using the 25th Amendment to oust him – prompting a strong, negative reaction from Trump and his GOP allies. Rosenstein has vaguely disputed McCabe’s description of those conversations.

“Treason!” Trump wrote Monday night on Twitter, after apparently quoting from a segment on Sean Hannity’s television show about McCabe.

McCabe – who is in the middle of a media tour promoting his new book, “The Threat” – told Guthrie the FBI felt it had good reason to investigate Trump in May 2017 after he fired James Comey as the bureau’s director. He said the bureau thought it was “possible” that Trump was working on behalf of Russia, and opening a case signified that the FBI was treating the matter as a national security threat.

McCabe, who has long been a target of criticism from Trump, was fired from the FBI in March 2018, after the Justice Department’s inspector general alleged he lied repeatedly to investigators exploring a media disclosure. McCabe has said he believes he was fired because he opened the investigation into Trump. He told Guthrie that he plans to sue the Justice Department over his dismissal – although he did not specifically address the evidence that the inspector general detailed against him.

On Tuesday, Trump again lashed out at McCabe – though he took aim not at McCabe’s comments about the Russia investigation, but instead his separate assertion that Trump commented negatively on McCabe’s wife’s unsuccessful run for a state senate seat in Virginia. Trump has repeatedly noted that Jill McCabe took money from the group of a prominent supporter of Hillary Clinton, and Andrew McCabe alleged in his book that Trump told him in a conversation his wife’s loss “must have been really tough.”

“To lose,” Trump said, according to McCabe’s account. “To be a loser.”

In a tweet Tuesday, Trump wrote, “I never said anything bad about Andrew McCabe’s wife other than she (they) should not have taken large amounts of campaign money from a Crooked Hillary source when Clinton was under investigation by the FBI. I never called his wife a loser to him (another McCabe made up lie)!”

Asked on ABC’s “The View” about the president’s recent tweets about him, McCabe said, “The president has been lying about me and my family for the last two years.”

Leave a Reply to Dumb and Dumber Cancel reply