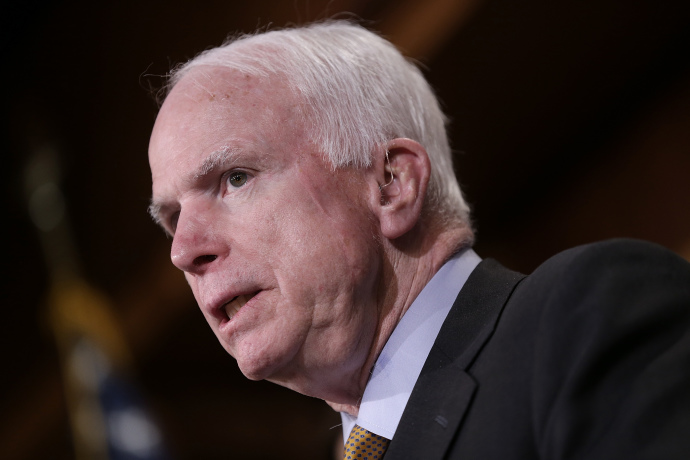 Sen. John McCain spoke out yesterday in defense of the free press after President Donald Trump lashed out against the news media several times over the past week, at one point declaring it “the enemy of the American People!”

Such talk, McCain, R-Ariz., said on NBC News in an interview set to air today, was “how dictators get started.”

“In other words, a consolidation of power,” McCain told “Meet the Press” host Chuck Todd from Munich. “When you look at history, the first thing that dictators do is shut down the press. And I’m not saying that President Trump is trying to be a dictator. I’m just saying we need to learn the lessons of history.”

The 80-year-old Republican senator was responding to several tweets by Trump over the past week, in which he repeatedly attacked the media as “fake news.” In one widely shared tweet Friday, Trump said the press was “not my enemy” but that of the American people.

In the “Meet the Press” interview, McCain told Todd that a free press was central to a functional democracy, even if news organizations’ stories challenged those being held accountable.

“I hate the press. I hate you, especially,” he said to Todd, who laughed. “But the fact is, we need you. We need a free press. We must have it. It’s vital.”

“If you want to preserve democracy as we know it, you have to have a free and, many times, adversarial press,” McCain added. “And without it, I am afraid that we would lose so much of our individual liberties over time. That’s how dictators get started.”