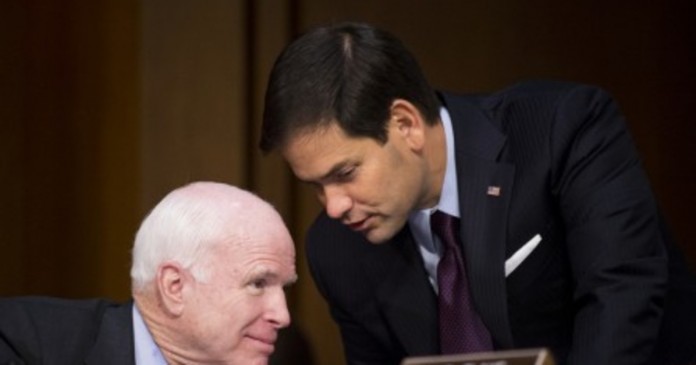 Sen. Marco Rubio of Florida won the Republican nomination for Senate on Tuesday night, a result that enhances the GOP’s chances of retaining that seat and the Senate majority.

Elsewhere in the state, Rep. Corrine Brown, D-Florida, facing a 22-count federal corruption indictment as well as a redrawn district, became the fifth House incumbent to lose a primary this cycle. Former state senator Al Lawson won the Democratic nomination in her stead.

Sen. John McCain (Arizona) beat back a vigorous primary challenge from the right in the Republican primary. Former state senator Kelli Ward attacked McCain as too willing to compromise with Democrats but struggled to raise the money and amass the widespread support needed for a serious challenge to the six-term incumbent. McCain held a 20 percentage point lead in early returns Tuesday.

In Florida, political watchers scoured primary returns in a bevy of House districts that were been redrawn just months ago by a court-ordered redistricting. At least seven of the state’s 27 House seats will have new representatives in January, and as many as eight more could see turnover.

Hotly contested primaries developed to fill the open House seats of Murphy and Grayson, as well as those vacated by the retiring Gwen Graham (D), Ander Crenshaw (R) and Curt Clawson (R).

Many of those races have been marked by the familiar national dynamic pitting the party establishment vs. insurgents. In the redrawn 2nd District, surgeon Neal Dunn eked out a victory over lawyer Mary Thomas, who had garnered support from national conservative groups such as the Club for Growth.

A similar dynamic was at play in the Jacksonville-area 4th District, being vacated by Crenshaw, where former county sheriff John Rutherford beat Hans Tanzler III, a lawyer, and Lake Ray, a state lawmaker, who had both sought to portray Rutherford as insufficiently conservative for the safely Republican seat.

In the Atlantic-coast 18th District, left open by Murphy, wounded veteran Brian Mast was buoyed to victory by national conservative groups over Rebecca Negron, whose husband is president of the state Senate. But in the 19th District seat vacated by Clawson, Francis Rooney, former U.S. ambassador to the Vatican and a major GOP fundraiser, won the party’s nomination over Chauncey Goss, son of former congressman and CIA director Porter Goss; and Dan Bongino, an ex-Secret Service agent who twice failed in Maryland congressional bids.

In the Miami-area 26th District, Democrats tangled for the right to challenge incumbent Carlos Curbelo (R), who is at the top of national Democrats’ target lists. Former Rep. Joe Garcia narrowly beat business executive Annette Taddeo, who had won the support of the Democratic Congressional Campaign Committee.

And in the Orlando-area 9th District, a safely Democratic district, state Sen. Darren Soto beat back an attempt by Dena Grayson – wife of the incumbent – to fill her husband’s seat. Should Soto win in November, he would become the first person of Puerto Rican descent to represent Florida in Congress.

Just a few months ago, the Senate primaries in Florida looked to be marquee contests as each party maneuvered to fill the seat that Rubio pledged to vacate. But in June, Rubio abruptly reversed course under pressure from national Republicans afraid that the seat was in jeopardy – perhaps along with the Senate majority. Beruff, a real estate developer who embraced the presidential candidacy of Donald Trump, stayed in the race but failed to catch fire with Florida voters after spending millions of his own dollars.

On the Democratic side, the battle between Alan Grayson and Murphy looked like it would turn into a proxy fight between progressive and centrist Democrats.