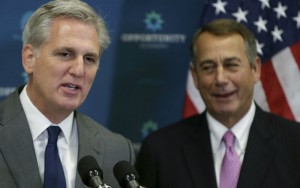 Kevin McCarthy, the presumptive frontrunner for Speaker of the House, stunned the political world Thursday afternoon when he announced that he will not pursue the post soon to be vacated by John Boehner. Instead, he will remain as the House Majority Leader.

According to Daily Beast reporters Betsy Woodruff and Tim Mak, McCarthy stood before his colleagues in a closed door meeting and proclaimed that he’s not “the one to unify the party.” Some supporters began to cry.

The election procedure will be postponed as Republicans scramble to figure out next steps. He had two challengers, Reps. Jason Chaffetz and Daniel Webster.

UPDATE — 1:10 p.m. ET: McCarthy briefly spoke to the press, at one point suggesting his controversial remarks about the Benghazi investigative committee was “unhelpful.”