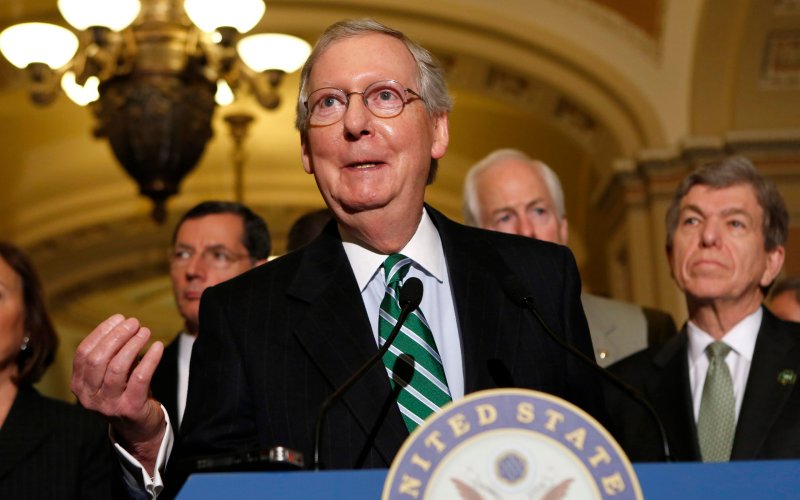 Senate Majority Leader Mitch McConnell, R-Ky., outlined new details Monday of what he wants to see in the next and potentially final coronavirus relief package, including a five-year liability shield for businesses and a possible new round of stimulus checks aimed at workers making $40,000 a year and less.

The comments from McConnell came in a series of events in Louisville, Ky., on the first day of a two-week congressional recess. They laid down markers for Democrats ahead of what promise to be contentious negotiations when Congress reconvenes on July 20. McConnell said he intends to release a new bill as the starting point for talks that will take place with coronavirus cases surging anew and economic pain still wracking the nation.

“I can’t comfortably predict we’re going to come together and pass it unanimously like we did a few months ago – the atmosphere is becoming a bit more political than it was in March,” McConnell said. “But, I think we will do something again, I think the country needs one last boost.”

“This is not over. We had hoped we would be on the way to saying goodbye to this health care pandemic. Clearly it is not over,” McConnell said.

McConnell has consistently said the next bill will include liability protections for businesses, health care providers, universities and schools. He offered a time period for these protections on Monday, saying he envisioned a “narrowly crafted liability protection” for activities related to the coronavirus that would kick in December 2019 and last through 2024.

“Unless you’re grossly negligent or intentionally engaged in harmful behavior you shouldn’t have to be penalized by getting sued on top of everything else so that’ll be in there, I guarantee it,” McConnell said.

Democrats have strongly opposed such liability protections, and it’s not clear where a compromise on the issue might lie.

McConnell also said the next rescue package “could well” contain another round of stimulus checks, an issue that’s remained unsettled, with Treasury Secretary Steven Mnuchin pushing for more stimulus checks but some Republican senators and Trump administration officials resisting.

“I think the people who’ve been hit the hardest are people who make about $40,000 a year or less,” many working in the hospitality industry, McConnell said — suggesting that a new round of checks could be directed to these individuals.

The Cares Act in March sent out $1,200 checks to individuals making $75,000 a year or less, with smaller amounts going to people making up to $99,000 a year. Democrats support much more generous new checks, and have criticized McConnell for inaction in recent weeks as cases spiked and weekly unemployment claims piled up.

Congress passed four bipartisan bills in March and April pumping some $3 trillion into the economy, but in recent weeks the Senate focused on issues such as an annual defense policy bill and confirming President Donald Trump’s nominees instead of new coronavirus legislation. When lawmakers return to Washington they will have three weeks to negotiate the next major relief bill before recessing again until Labor Day.

“The Republican majority has been out to lunch since we passed the Cares Act way back in March,” Senate MInority Leader Charles Schumer, D-N.Y., said on the Senate floor last week. “It’s been over three months since the Republican Senate has considered major covid-relief legislation. Weekly unemployment claims are measured in the millions. States are shedding public service jobs in the tens of thousands. The number of new cases is accelerating in nearly half of our states. . . . Just how much more assessment do we need?”

It appeared many states were going to accelerate their reopening plans last month, but a number of governors have reversed course after a large increase in cases in the past several weeks. Several governors have ordered bars to stay closed, and many small businesses remain shuttered. Another 1.4 million Americans sought unemployment benefits last week, an elevated level that has persisted for more than three months.

With some Republican senators resistant to spending any more money at all, McConnell will face a challenge finding consensus among Senate Republicans and with a Trump administration that is itself divided, even before starting negotiations with Democrats, who are pushing for much more new spending than Republicans support. He said that in addition to liability protections the new bill will focus on getting kids back to school, restoring jobs, and boosting the health care system, but did not offer details on those issues.

“I think the key right now is to try and get sort of the White House and Republicans on the Hill in the same place,” said Sen. John Thune, R-S.D. “Senate Republicans are doing this assessment, determining where we think the greatest needs are going to be, watching what’s happening in the economy as it opens up. But definitely going to be heavily focused on the health-care crisis and making sure that we can get the schools open in the fall.”

Already, thorny disputes are shaping up over what to do about enhanced unemployment benefits that expire July 31, additional aid that Democrats are demanding for state and local governments, and the possible new round of stimulus checks.

A better-than-expected jobs report on Thursday bolstered sentiment among some Republicans that Congress has already done enough and that little if any additional economic assistance is needed, even though millions remain unemployed. At the same time, record new levels of coronavirus infections across the South and beyond are forcing lawmakers to reassess what they might need to put in the package, such as more money for hospitals, schools, testing and vaccine development.

“I think on the health-care part, there’s realization we’re going to have to do more, because unfortunately in some of our states we’ve seen the numbers start to go back up again,” said Sen. Rob Portman, R-Ohio. “So we have to be attentive to that.”

Congress passed four bipartisan relief bills in March and April totaling about $3 trillion for individual stimulus checks, unemployment insurance and support for the health-care system, state and local governments, and more. That included more than $600 billion for small businesses through the Paycheck Protection Program, which administration officials credit with saving millions of jobs.

There have been no bipartisan negotiations since, even though Democrats have repeatedly demanded them. Republicans point out that more than $1 trillion of the money already authorized has yet to be committed, and they have continually argued for a wait-and-see approach before taking new steps.

Congressional Republicans have recognized that another relief package will pass but are hoping to take a more limited approach in what they view as the final legislation. The Cares Act passed in March sprayed federal funding across the economy, funneling trillions of dollars to families and small businesses with few strings attached. Republicans are hoping the next package includes similar elements to the Cares Act but in a more narrow way, such as long-term, low-interest loans for the industries hit particularly hard by the virus

The new markers McConnell laid down will make the next round of negotiations even tougher than the last ones, especially as the election nears and partisan tensions rise. In addition to his comments on liability protections, McConnell has privately stressed to top administration officials that the price tag on the next bill should not exceed $1 trillion.

Many Democrats view that as a paltry sum. The Democratic-led House passed a sweeping coronavirus response bill in May called the Heroes Act that cost more than $3 trillion. McConnell brushed it aside and Trump threatened to veto it.

At a celebratory news conference Thursday on the jobs numbers, Trump said that work was underway with Congress on the fifth package. “Talking about payroll tax cuts, we’re talking about more money being infused,” the president said. Trump has long been focused on a payroll tax cut, something congressional Republicans have resisted but have begun to sound more open to of late.

Complicating matters for the next round of talks, divisions within the Trump administration have made the president’s priorities unclear. The White House has not taken a position on a range of critical policy questions, including the issue of state and local aid, which Democrats are demanding should be increased beyond the $150 billion approved in the Cares Act in March.

Asked Monday about the issue of state aid, McConnell said, “That is another category we’ll be looking at.”

There has also been talk of “repurposing” money that has gone unspent so far, including more than $130 billion in the Paycheck Protection Program, which Sen. Marco Rubio, R-Fla., and others hope to direct to businesses or industries that have been hit particularly hard, such as restaurants and hotels, perhaps with a renewed focus on smaller and minority-owned businesses.

Some lawmakers have remarked on the fact that there’s been tepid demand for some lending facilities in a $500 billion Treasury Department and Federal Reserve fund, suggesting some of that money could be redirected, but it’s unclear how that might be resolved.

Various factions within the administration are jockeying for competing priorities. For instance, Mnuchin has pushed internally for sending out another round of stimulus payments to millions of Americans, and the president has expressed support publicly for doing so. But several conservative senior White House economic officials have voiced skepticism about a new round of checks, arguing Americans are more likely to save those benefits than spend them in the economy, a concern voiced by some Senate Republicans as well.

Among the most contentious issues facing lawmakers is what to do with the $600-per-week additional unemployment benefits approved by Congress in March, which expire July 31.

Trump and senior Republican lawmakers have said the payments should be ended or dramatically scaled back, arguing the large benefit discourages workers from trying to find a job. Democrats and many economists say doing so would sharply reduce the incomes of more than 30 million people – months before the presidential election – and could drain the economic recovery of hundreds of billions in stimulus spending.

White House officials have signaled to outside allies that they may accept a compromise measure in which the payment is reduced from an extra $600 per week to something closer to an extra $200 or $300 per week, while also getting behind another round of $1,200 stimulus checks. Administration officials have said they are exploring a “back-to-work” bonus that would give workers additional compensation for returning to their jobs, an idea supported by some key congressional Republicans.