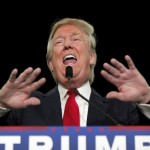 Donald Trump again came under fire on Wednesday from the media – always ready to pounce on him – for mocking a New York Times reporter with a congenital joint condition at a South Carolina rally.

The Times lambasted Trump as “outrageous” for berating its reporter, Serge Kovaleski, while trying to defend his claim that “thousands” of Muslims in New Jersey celebrated the 9/11 attacks. Kovaleski recently disputed Trump’s claim while recalling a Washington Post article he wrote a few days after the attacks.

During his speech Tuesday night, Trump appeared to mock Kovaleski’s condition as he jerked his arm in front of himself. Kovaleski has arthrogryposis, a congenital condition that affects joint movement.

A New York Times spokesperson told Politico, “We think it’s outrageous that he would ridicule the appearance of one of our reporters.”

Late Wednesday night, Trump posted a series of tweets attacking the newspaper, stating, “The failing @nytimes should be focused on good reporting and the papers financial survival and not with constant hits on Donald Trump!”