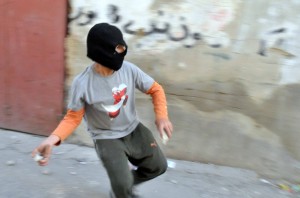 BREITBART reports: The Palestinian Authority, which incites its own citizens to carry out murderous attacks on Israelis, is cynically accusing the Israel Defense Forces of committing an “execution” when soldiers mistakenly shot and killed a Palestinian teen while searching for Palestinians carrying out potentially deadly attacks on Israeli vehicles. Attacks encouraged by the PA itself.

Many in the international news media are claiming the innocent teen, Mahmoud Rafat Badran, 15, was suspected of “stone throwing,” as if he were accused of tossing pebbles at Israelis.

These are just a few samples of similar such reporting across the English-language mainstream news media.

In actuality, just before Badran was mistakenly killed, two tourists and one Israeli were lightly wounded when a group of Palestinians early on Tuesday morning attacked moving vehicles on an Israeli highway that straddles the West Bank. The Palestinians lobbed stones and firebombs at speeding vehicles, and poured oil on the road with the goal of causing accidents.

Such attacks can be potentially fatal for obvious reasons. One stone can shatter a windshield and cause a driver to lose control. A firebomb could potentially create a vehicular explosion.

Indeed, on Tuesday, an Israeli bus passenger and two tourists were injured in an accident caused by the Palestinian troublemakers.

Haaretz has a rundown on the killing of Badron during the height of the search for the perpetrators:

At around 1 A.M. on Tuesday a firebomb and rocks were thrown and oil was spilled onto the highway which runs between Jerusalem and Modi’in. An Israeli bus passenger and two tourists in another vehicle were injured in the incident which occurred near the village of Beit Sira.

An officer and group of soldiers from the Kfir Brigade responding to the incident spotted the injured people, chased after the stone throwers, and fired accidentally at a car, killing the Palestinian teen, army investigators found.

The IDF said that a group of Palestinians tried to disrupt traffic by throwing rocks and firebombs at passing cars, significantly damaging a vehicle and wounding three passengers. Two suspects were arrested.

The IDF spokesperson’s office said that “in the course of gunfire to remove a threat, uninvolved people near the scene of the incident were accidentally hit.”

Because Israel is a democracy with the rule of law, as opposed to the terror-stained PA tyranny, the IDF has already opened an investigation into the incident. Haaretz points out that the investigation will focus on whether the soldiers “opened fire according to protocol and if the forces felt a clear and immediate threat from the family car.”

According to the army’s open-fire regulations, which were revamped earlier this year, soldiers should not fire at a Palestinian assailant fleeing after an attack unless the suspect poses an immediate threat.

The decision to investigate the incident is the result of army policy to probe any lethal shooting that is not a result of direct combat.

Yet PA officials, who almost daily incite their own people into carrying out such attacks, squarely blame Israel for the Badran incident, and claim the IDF carried out an “execution.”

Without a trace of irony, PLO Secretary General Saeb Erekat slammed what he called Israel’s “brutal attack” on the “apartheid road” where Badran was killed.

“This coldblooded assassination reaffirms our calls to the UN Special Rapporteur on Extrajudicial, Summary, or Arbitrary Executions, to initiate an immediate extensive investigation into Israeli extrajudicial killings of Palestinians, particularly children,” Erekat continued. “The international community has the responsibility to stop allowing Israel’s impunity for the crimes it commits against the occupied land and people of Palestine.”

The Palestinian Foreign Ministry labeled the shooting an “extrajudicial execution” and claimed it was Prime Minister Benjamin Netanyahu’s “reaction to EU’s adoption of the French initiative,” a proposal to jump start Israeli-Palestinian talks.

Israeli Foreign Ministry Spokesperson Emmanuel Nahshon brushed off the PA criticism as “cynical slander,” and reminded the public of the PA’s anti-Jewish incitement.

“If it weren’t for the difficult security situation which is entirely the fault of Palestinian incitement and terrorism, Israel wouldn’t have been forced to make use of lethal force in order to protect its citizens,” Nahshon said.

“Unfortunately the list of Israelis killed by stones thrown by Palestinians at roads is a long list and every injured Israeli is proof of the need for taking security measures,” he added.