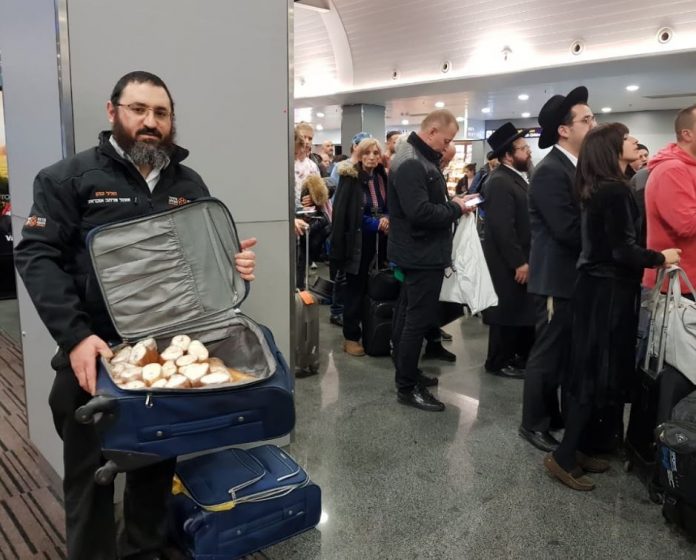 35 Israelis were reportedly detained in a Ukrainian airport in February, after being told that they would not be allowed to enter the country.

Heated cell phone footage showed Israelis, most of them religious, arguing with airport personnel after being kept without beds or access to kosher food for over 24 hours.

The phenomenon of Israelis and other Jews being stranded in the Ukraine, however, is not uncommon: every day travelers, either due to fight delays or lack of planning, struggle to find kosher accomodations in the infamously antisemitic country.

Rabbi Hillel Cohen is trying to change that.

In addition to being the Rav of a Ukrainian shul, Rabbi Cohen has dedicated much of his time to advising and hosting Jewish travellers.

“I personally receive many calls for help every day from the hundreds of thousands of Jewish tourists flying to Kiev and Odessa. Half of every day is spent helping Jewish tourists who are stranded in the local airports without food and helping them with whatever they need: missed flights, passport problems, medical emergencies, lost items, or just help with translation.”

Cohen has personally worked out deals with Kiev and Odessa airport food stalls, and personally stocks them with kosher sandwiches. He also recently raised money to donate a sefer Torah to the airport, so that the many minyanim praying there each day have the ability to lein. It is an ambitious endeavor, but an essential one: thousands of Jews travel to the Ukraine each month, and until now there has been a shocking lack of resources.

Rabbi Cohen has a revolutionary new project on the horizon: a hotline in both Hebrew and English. He can’t do it alone, however: “ I’ve always tried my best to help, but there is a limit to how much one person can do.”

Rabbi Cohen has entreated the public to join him in this special project. He believes that Jews should have access to the resources they need, even in countries which shut them out. Donate here so that the next time a frum family is stuck, they can have a meal on you.