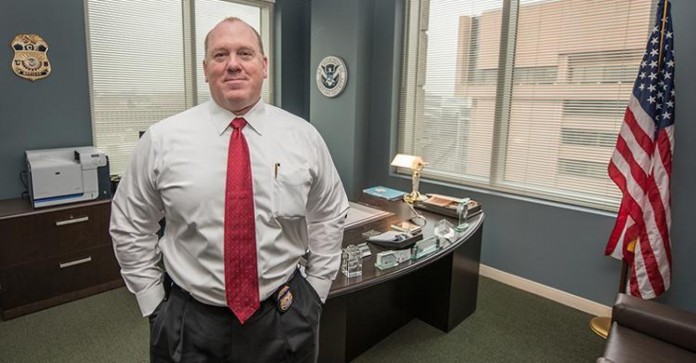 Thomas Homan deports people. And he’s really good at it.

Homan is the Washington bureaucrat in charge of rounding up, detaining and kicking illegal immigrants out of the country. As Americans fight over whether the next president should build a wall on the Mexican border to keep migrants out or protect millions of them from deportation, Homan is actually hunting undocumented immgrants down right now, setting strategy for 8,000 officers on the front lines.

He was honored last week with the government’s highest civil service award, bestowed on federal leaders whose work gets “extraordinary” results. According to his bosses at the Department of Homeland Security, Homan not only successfully handled an unexpected surge of unaccompanied children and families who have streamed here from Central America across the Southwest border, but last year his operations set records for expelling illegal immigrants with criminal records.

Many of President Obama’s immigration policies have been unpopular with immigration advocates, who say he did not do enough to overhaul a system that relies on deportations. But Homeland Security officials were intent on plugging Homan’s success.

“The first thing I do when I get into the office every day is I read the media stories about immigration,” he said in an interview before receiving a 2015 Presidential Rank award for distinguished service at a State Department banquet Thursday night with 42 other senior executives.

“I sit here in the morning and I get frustrated. People don’t understand what we do or how we do it. They just make assumptions.”

The career immigration official is quick to note that people who are deported have exhausted their due process rights to stay in the U.S. “and already had their day in court.” Someone in poor health is not going to be automatically expelled, he said.

“Yes, it’s not my favorite part of the job,” Homan said of deportations. “But their due process is over, that final order of removal needs to mean something.”

If Donald Trump or Ted Cruz gets to the White House, this former New York cop could be the person charged with deporting approximately 11 million people who are in the U.S. illegally. Or he could delay kicking out about five million undocumented migrants the Obama administration fought before the Supreme Court last week to allow to work here legally.

Homan, 54, is a plainspoken — he likes to call it outspoken — former patrolman from far upstate New York with a strawberry blond crew cut and baby blue eyes. He has worked almost every job at the agency now called U.S. Immigration and Customs Enforcement — border patrol agent, investigator, supervisor, up the ranks to his current post, executive associate director for Enforcement and Removal Operations at U.S. Immigration and Customs Enforcement. He joined the immigration agency in 1989.

“The entire life cycle of immigration,” he explain, referring to the purview of his career. “I’ve arrested aliens. I’ve sat on low houses. I’ve worked on the front lines. I’m a cop in a cop’s job and cops work for me,” he said, crediting his 27 years in immigration enforcement with earning him the respect of the 8,000 men and women on his staff.

The White House cited his success expanding arrests and detention beds for the recent surge in children and families fleeing violence in Central America. Last year, Homan managed the deportation of a record number of illegal immigrants with criminal histories with the help of an expanded fingerprinting system that local police departments share with immigration authorities.

By following the Obama administration’s directive to sharpen the focus of enforcement on criminals and foreigners who pose security threats, “We executed the mission perfectly,” Homan said.

But the mission is under attack from conservatives on the right and immigration advocates on the left, with Republican demands for more border enforcement and anger from Latinos who blame President Obama for carrying out large-scale deportations and a failure to overhaul immigration laws. Trump has pledged to kick out illegal immigrants and build a wall along the U.S. border with Mexico, and Cruz says he would deport 11 million people who are not authorized to be here.

At a hearing before the Senate Judiciary Committee in February, Alabama Republican Jeff Sessions told Homan he was disappointed that ICE had only ordered 121 people deported after immigration judges denied the asylum petitions of 1,800 migrants.

“Did people say, ‘Good work, Mr. Homan, you’re doing a good job?” Sessions asked. “Or did they attack you for trying to enforce the law the judge had ordered?”

Human Rights First criticized the administration in a report last week charging that chronic under-funding, hiring challenges and shifting enforcement strategies have led to alarming backlogs in the asylum and immigration systems, with more than 620,000 pending removal and asylum cases.

Homan won’t talk publicly about the immigration debate or which side he is on. He says he is only enforcing the law as it stands now. He winces at what he calls a widespread misunderstanding on both sides of what his staff really does.

He tells his employees in the field that they have nothing to apologize for.

“They’re beaten down, frankly,” he said. “But the laws were enacted by Congress. We don’t do schoolhouse raids or neighborhood raids. We don’t show up with bulletproof vests. I’m not ashamed of what I do.”

Instead, “We arrest a lot of bad guys. We prevent crimes.”

Homan moved to Washington in 2013 to take ICE’s top enforcement job. He says he meets a lot of new people who do not view what he does with admiration.

“There are folks I meet who say, ‘I read this. I saw this in the news. That sounds terrible,'” he said. “I try to spend my time educating them.”

And yes. Homan has a definite opinion on Trump and his immigration policies.