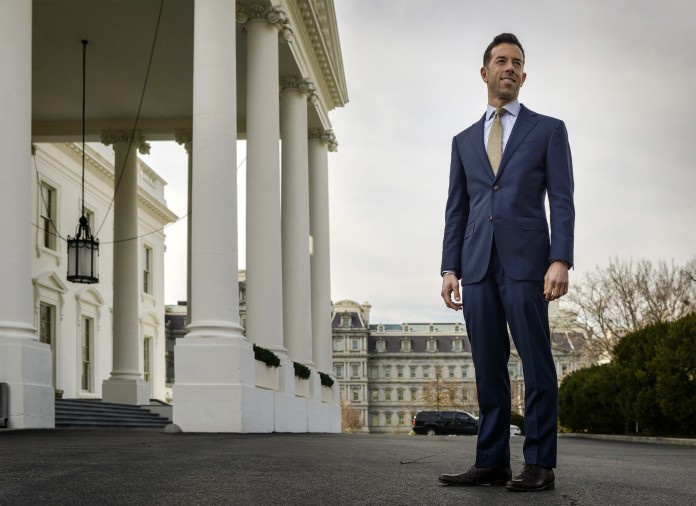 Outside the Oval Office is a small rectangular room with two side-by-side, nondescript wooden desks. In one sits President Barack Obama’s personal secretary. In the other is Brian Mosteller, the man who sweats the small stuff so the president doesn’t have to.

Few have even heard of Mosteller, but if you look closely at photographs taken inside the White House, you can often glimpse Mosteller at the edge of the frame, omnipresent. From his chair, he is the only person in the White House with a direct view of the president at his desk. No one gets in the Oval Office without going past him.

Mosteller’s official title is director of Oval Office operations, although a more apt name might be anticipator in chief. When Obama is in Washington, every move the president makes, every person he meets and every meeting he attends has been carefully orchestrated by Mosteller.

He knows where Obama likes his water glass placed on the table at meetings and who he’d want to sit beside. He knows how he prefers the height of a lectern. He researches a head of state’s favorite drink so the president can offer it. He readies Obama’s remarks and sets them, open to the first page, wherever the president will be speaking. He tells Obama when a sock is bunched at his ankle or his shirt is wrinkled before an interview.

The president returned to Illinois last week to commemorate nine years since he announced his long-shot bid for the White House, a history-making moment of proportions few could have known then. There remain just a few people who were there in those very early days.

Unlike some staffers close to the president who have enjoyed their own moments in the limelight, Mosteller, who first met Obama in Chicago after his famous speech in Springfield, Ill., to start his campaign, has intentionally stayed in the background. Until now, he had only ever given one interview, in 2009.

Admiring colleagues refer to him as an unsung hero of the administration – the man behind the man, without whom Obama arguably would not have such a universal reputation for cool – but Mosteller likes a low profile.

For one thing, he needs to stay focused. The entire West Wing relies on him, and no one more than the president.

Mosteller “knows the president very well, he pays attention to everything,” said Valerie Jarrett, the president’s longtime senior advisor. “The president knows how much Brian cares about him and that it isn’t ‘I care about you from afar,’ it’s ‘I’m going to ensure the nitty gritty details of your life from large to small are attended to.’ The president trusts him completely.”

Disarmingly humble, Mosteller, 40, never had much interest in politics as a blood sport. Instead, as a little boy, he’d watch captivated as President Ronald Reagan would stride up the red carpet to the podium in the East Hall to address the nation. Who is cuing the president as he speaks, he recalls wondering. What work happened behind the scenes to prepare for such an important event?

“It was something that transcended Akron, Ohio, or my small neighborhood,” he said of his fascination with protocol. The possibility of playing a behind-the-scenes role like that “was bigger than me and had the ability to affect something bigger than me.”

In college, Mosteller applied for a summer internship in the Clinton White House. He got a slot working with the advance team and ended up staying for the final two years of the administration.

He completed his last college credits remotely as he staffed the president and the first lady on domestic and international trips. He loved the exposure to the world, but he didn’t want a career in politics. He turned down a job working on the Gore campaign and moved west to help prepare Salt Lake City for the 2002 Olympics.

After several years of doing logistical planning around the world for the Olympic games, Mosteller settled down in Chicago in 2007. He bought a home. He was ready to put down roots.

Then he received a phone call that his state’s junior U.S. senator was going to announce his run for president. Obama planned to do two kickoff events. First, he’d speak in Springfield, Illinois, where Abraham Lincoln 149 years earlier announced his candidacy. Then he’d come to Chicago.

He accepted the temporary job, but he made it clear that he had little interest in ever leaving Chicago.

Then he met Obama.

It wasn’t the young politician’s oratory skills that drew Mosteller in, though he was as impressed with those as most of America was back then. It was something intangible that Mosteller now has trouble describing. There was a kindness, an authenticity, he said, that made him want to give up everything to join the shoestring campaign.

By the 2008 convention, Mosteller had transitioned to the job he has pretty much had ever since: To be Obama’s eyes and ears. To see every event from Obama’s perspective. To be the president’s fiercest advocate.

On Election Night 2008, Mosteller waited in the loading dock of the Grand Hyatt hotel in Chicago for the president-elect. He escorted the Obamas to the hotel room where their core campaign team had just watched his decisive victory. And he escorted them back down the elevator to go to Grant Park, where the man just elected would greet more than 200,000 cheering fans.

Obama was quiet and reflective that night. Mosteller knew to give him space. He knew when to ask the Time magazine photographer to stop flashing his camera. He helped decide when it was appropriate to put him on the phone with Sen. John McCain (R-Ariz.).

But he didn’t quite have everything about the man down pat yet.

On the elevator ride back down, Mosteller briefed Obama on how the victory speech would go – an event he’d helped organize.

“And then the fireworks are going to go off,” Mosteller began.

“No fireworks,” Obama said. That would be too ostentatious.

Mosteller didn’t flinch even though at that moment a freighter from Indiana was waiting in a lake to set them off. He called the crew and told them they could go home.

“I agreed with him,” Mosteller said. “I’m there to make whatever he wants happen. . . . There were these enormous pressures descending on this man and this family. I take away the small pressures with which I can contend so he can focus on the more massive.”

Reggie Love, Obama’s body man until 2011, remembers the president asking him once how to pronounce a word. When Love told him, Obama seemed incredulous. “Well, let’s ask Brian,” Love recalls the president saying.

“When you see how much time and preparation and work Brian puts in to ensure everything goes off seamlessly you have no choice but to trust someone like that,” Love said.

Mosteller, tall and slim with thick dark hair and light eyes, arrives to his clutterless desk at least an hour before the president every morning, unlocking the door just off the Rose Garden that Obama enters through. He makes sure to fill the monogrammed water bowl for his best bud Bo, the first dog, who comes to play.

As they await the president’s arrival, Mosteller and Obama’s personal secretary, Ferial Govashiri, will often turn on music and sing together.

After Obama has left for the day, Mosteller is still there to turn off the lights and lock up, as if the Oval Office were a small storefront.

In between the president’s arrival and departure, Mosteller doesn’t miss a beat.

Recently, Obama joined a cancer research roundtable at the White House. He was meant to give remarks and stay for about 45 minutes. Mosteller was going over the schedule and realized that there was no clear exit time for the president, who couldn’t just walk out in the middle of such an emotionally heavy discussion. So Mosteller massaged the timing so there would be an obvious break for Obama to excuse himself.

By this time, so late into Obama’s presidency, Mosteller said there is a comfort that comes from working alongside someone for so many years. He knows his boss’s quirks; he senses his moods.

“The president takes comfort having someone like Brian around,” said Josh Earnest, the White House press secretary. “The president is somebody who doesn’t mind jokingly giving someone a hard time. Brian has the comfort level and the stature to give it back to him – at least a little bit.”

Like any two co-workers with neighboring offices, Mosteller is the person who Obama wanders by to chat casually or vent during the day. They might joke with each other about a long-winded visitor or Washington’s response to snow. And Mosteller has more freedom than just about anyone to go into the Oval Office unannounced.

One morning in the middle of a daily briefing in June 2015, Mosteller burst through the door to personally deliver the news that the Supreme Court had upheld a key provision of the Affordable Care Act.

Obama raised his left arm in the air, a moment captured for posterity by the White House photographer.

Reflecting back now on Obama’s two campaigns and his presidency, and all the people who have come through the Oval Office, Mosteller said he has learned how resilient people are. He has witnessed Obama weather the many stresses of the presidency, as he has weathered his own job supporting him. He has watched as the American people have borne economic and other hardships.

This lesson of resilience will stay with him long after this experience in the White House is over, he said.

“A person can handle anything,” he said. “That person could be the president of the United States, a bus driver, an unemployed mother of four, a young volunteer, a child with a disability or myself. For the most part, what holds us back is within us. The other parts – that’s where your community and, in some cases, the government can come in to assist.”

Possessed of this larger perspective, few things can upset him now, Mosteller said. His high-stakes job has shown him that people can surmount life’s challenges and come out better people on the other end.

“In a way, that sentiment makes the world seem smaller because there’s no place or person or project or adventure that seems too daunting,” he said.

Nine years ago, he went with his gut. What comes next is unknown, and he’s fine, even excited, by that.

But for now, there’s still 10 more months. And Obama needs him.