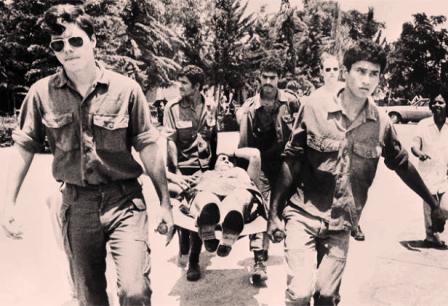 On the surface, the meeting looked like a typical reunion. The two men and five women greeted each other like old friends, introduced their children and seemed genuinely happy to be seeing one another again.

But these people did not go to school together, nor did they grow up in the same cities.

What they have in common is that 40 years ago, on June 27, 1976, they were all children on board an Air France flight from Tel Aviv to Paris that was hijacked and taken to Entebbe, Uganda.

For a week, they were held by terrorists from the Popular Front for the Liberation of Palestine and the Revolutionary Cells, a spin off of the German Baader-Meinhof Gang, a radical left-wing group. And on July 4, 1976, they were rescued by Israeli commandos in a daring military operation.

In total secrecy, about 200 Israeli commandos flew in four Hercules jets more than 2,000 miles to the East African state. In the middle of the night, they stormed the airport terminal where the hostages were being held, killed the terrorists and some Ugandan soldiers and flew all the remaining passengers, more than 100, back to Israel.

At a special ceremony in Tel Aviv on June 27, the children, now adults, shared their experiences with former Israeli president Shimon Peres. At the time, Peres was defense minister and had stubbornly insisted Israel’s only option was a rescue mission despite the risks.

“It was not an easy decision, but I believed that doing anything else would be a mistake and bring more danger,” he said.

The mission was originally named Operation Thunderbolt but was later renamed after the Israeli army’s only casualty: Lt. Col. Yonatan “Yoni” Netanyahu – the older brother of current Israeli Prime Minister Benjamin Netanyahu. The prime minister will visit Entebbe on Monday for an event marking the 40th anniversary of the raid.

“It was my first time going on a plane, I was so excited,” said Shay Gross, who celebrated his 6th birthday in Entebbe with a few pieces of toffee candy. “But the minute I saw the two German terrorists with hand grenades, and I saw the fear on my parents’ face, I knew something very bad was happening. It is something you never forget.”

“When the hijackers took over, it was very scary,” said Benny Davidson, whose father was a reserve colonel in the Israeli air force. “They told everyone to take out their IDs, and I remember we ripped up my father’s ID and put the pieces in a can of coke so they would not know who he was.”

Davidson, who was 13 at the time, said that one of the most frightening moments was when Ugandan dictator Idi Amin arrived at the airport to talk to the hostages.

“When I tell this story to Americans, I tell them to think of Shaquille O’Neal, only twice as big. He was obese, and when he spoke, he had perfect English but with a strong African accent, it was very frightening,” he said.

“I remember Idi Amin very well,” said Anat Brodesky Charniak, who was 6 at the time. “The first thing I did when I got home was go to my room and draw a picture of Idi Amin, his wife and his child. I used many colors, I wanted to draw all the colorful medals he had on his uniform. I also drew flowers all around, maybe because that is what children do or maybe because I was optimistic after being rescued. I don’t know.”

“I did not have time to put my shoes on,” she said.

Ella Sissenwine, then 5, also remembered looking for her shoes after the Israeli commandos arrived. “But I could only find one,” Sissenwine said. “I remember getting home and all our neighbors and the media were waiting for us. There were so many flowers, they filled our apartment.”

“When we landed in Israel, everyone was so happy and overjoyed but my mother was in shock. She did not know what was happening with my father,” said Tzipi Cohen, who was 8 years old.

Cohen’s father, Pasco, was badly injured during the raid and was flown to Kenya for medical treatment.

Cohen said she remembered talking to then-Prime Minister Yitzhak Rabin and being shocked that a young girl was allowed to speak to him.

She also recalled soldiers coming to tell her mother that her father had died.

“I don’t remember that week in Entebbe as being so traumatic,” she said. “But the minute I heard about my dad, I blacked out. I don’t remember his funeral or sitting shiva,” the Jewish mourning period.