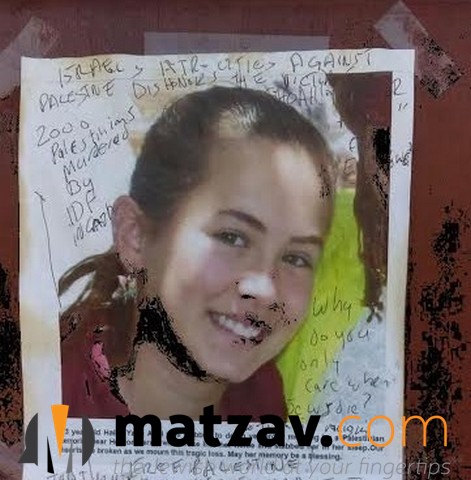 New York City police are actively investigating the vandalism of a memorial sign for 13-year-old terror victim Hallel Yaffa Ariel, Mark Hirschberg reports for JP Updates. Ariel was fatally stabbed by a 17-year-old Palestinian terrorist while sleeping in her home in Kiryat Arba in June.

The memorial sign, which was posted on the door of Congregation Sons of Israel in Queens, had the message, “2000 Palestinians murdered by IDF. Why do you only care when Jews die?” written on it, along with “Zionism is racism.”

“On Tuesday, August 16, at around 7 p.m., we put up a new and bigger sign to mourn the death of this young girl,” Rabbi Jay Shoulson told JP. “When we returned Wednesday morning the sign was gone. Someone who can vandalize and steal such a sign,” Shoulson concluded, “is not a human being.” Read more at JP Updates.