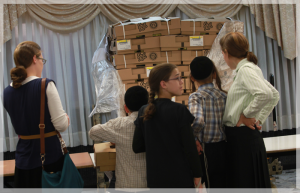 Thousands of families across the United States will be receiving the Mesamche Lev Power Auction booklet this week. Pre-released copies of the booklet were distributed to select individuals and journalists, who expressed much excitement at the prospect of what was termed a “different” kind of auction.

“This is not your typical auction,” said one anonymous viewer. “I think people are going to be very excited when they see the Power Mall and the Power Wins.”

The Power Mall is a shopping experience where donors earn Power Auction Reward Points with every dollar they donate. They redeem their Reward Points for fantastic free merchandise. There are forty six free gifts in the Power Mall, including valuable offerings such as designer giftware, a Canon camera, and a free weekend in the Raleigh Hotel. Power Wins, a Mesamche Lev innovation, give participants a secondfamily-friendly prize with each win. For example, the winner of a valuable insurance package will also win a free helicopter ride for three.

Raizy Y., a high school student from Flatbush, was excited about the auction questionnaire.

“I love a challenge, especially when I can win a prize,” she said. “It was fun to search the book to find the answers.” Other people commented on the Grand Prize, an opportunity not many can afford on their own; and other exciting features of the Power Auction.

“The main thing is that this auction gives you the power to give and to make a difference,” says Rabbi Zev Friedman of Mesamche Lev, who evokes the memory of the organization’s founder, Rabbi Zalman Ashkenazi, zatzal. “RebZalman dedicated his life to helping the poor. When people participate in the auction, they emulate him. Every auction purchase feeds hungry children and helps broken hearted almonosand yesomim.”