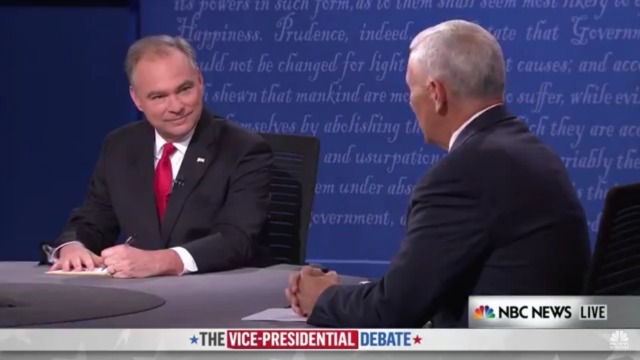 Speaking with The Algemeiner on Wednesday, Dr. Emily B. Landau, a senior research fellow at Israel’s Institute for National Security Studies (INSS), expressed dismay over Kaine’s assertion — made during a back-and-forth with his Republican counterpart Mike Pence — that the head of the Israeli military, Lt. Gen. Gadi Eisenkot, had said the Iran nuclear deal had kept the Islamic Republic from getting a nuclear weapon.

In fact, Landau said, the Eisenkot statement in question — which was made during a speech at an INSS conference in January — was far more nuanced.

“While General Eisenkot’s message was different from things we’ve heard from Prime Minister Benjamin Netanyahu, with less of a focus on worst case scenarios, what Eisenkot said was nowhere near a conclusion that the Iran deal prevented Iran from acquiring nuclear weapons,” Landau, the head of the Arms Control and Regional Security Program at the INSS, noted. “That’s just absolutely not what he said.”

Eisenkot, Landau emphasized, did not call the nuclear deal a historic turning point, despite media reports to the contrary.

“He instead described it as a strategic turning point and that’s a very different thing,” Landau said. “While he acknowledged that the deal gave Israel five years of strategic breathing space, as Iran wants to get the full benefits of sanctions relief, he also said Israel remained concerned about the 15-year timeline, due to the fact that Iran’s nuclear weapons ambitions — which are closely tied to its regional interests — have not changed.”

Furthermore, Landau said, Eisenkot is only the latest Israeli defense official to have had his words “misconstrued”  by US proponents of the Iran deal.

“Many statements by Israeli officials have been detached from their context and brought directly into the US debate by the administration as if they are just clear-cut statements in support of the deal — when, in fact, they were more ambiguous and meant for internal Israeli consumption,” Landau said. “I don’t think it’s innocent. It’s politically motivated. It’s a message we keep hearing from the Obama administration — they are trying to bring the Israeli defense establishment into the fold of the supporters of the Iran deal, as if to say to the American public, ‘Look, if the Israeli defense establishment is behind this deal, then how can anyone be critical of it?’ And this has been going on for a very long time.”

In a conversation with The Algemeiner on Wednesday, a senior official at an American Jewish organization echoed Landau’s sentiment.

“People who defend the Iran deal have nothing factual to say, so instead they push talking points that are half-true and untrue,” the official said. “It speaks volumes. The actual deal as it really exists can’t be defended, so people who try end up having to mislead about what it does and who supports it.”

Just last month, former Israeli Defense Minister Moshe Yaalon told a Washington Institute for Near East Policy forum that he was not aware of any Israeli security officials who supported the Iran deal.

Meanwhile, on Wednesday, an ABC News fact-check of the vice presidential debate determined that Kaine lied when he claimed that Democratic presidential candidate Hillary Clinton had, during her time as secretary of state, helped “eliminate the Iranian nuclear weapons program without firing a shot.”

“The nuclear agreement reached between six world powers and Iran last year does not completely eliminate the Iranian nuclear program,” the fact-check said.