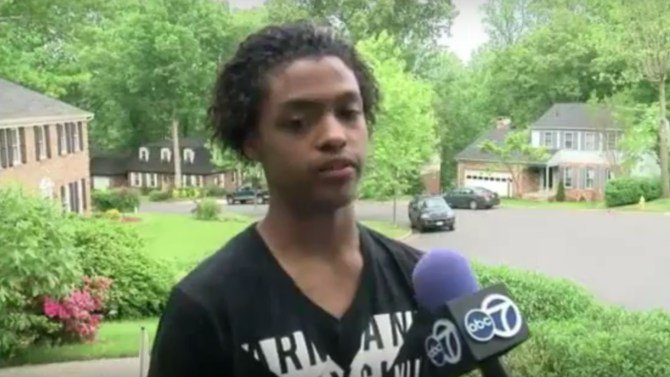 All Ryan Turk wanted was his carton of milk.

The Virginia teenager says he had forgotten to grab the drink the first time through the line at the Graham Park Middle School cafeteria, so he headed back. A recipient of free lunches at the school, Ryan felt he was just doing what he did every day.

But a school resource officer said he spotted the teen cutting in line and accused him of stealing the 65-cent milk. When Ryan didn’t cooperate with a trip to see the principal, authorities say, he was arrested and charged with disorderly conduct and petit larceny. Ryan turned down an offer of non-judicial punishment and, this week, a Prince William County judge set a trial date in November for the Dumfries teen, who is now a freshman in high school.

He will face the criminal charges just days after his 15th birthday.

Ryan and his mother, Shamise Turk, acknowledge that he did take a carton of milk on that day last school year, but they say he was entitled to it and did nothing wrong. They, and their lawyer, allege that Ryan was discriminated against, targeted because he is a black teenager who didn’t want to go along with a police officer who they believe was being unfair.

“No one needs to be punished for stealing a 65-cent carton of milk,” said Emmett Robinson, a lawyer who is representing the family and said Ryan’s arrest was related to institutional racism. “This officer treats kids like they’re criminals, and guess what happens – they’re going to become criminals.”

The case of the allegedly stolen milk is an example of the challenges students, schools and school resource officers face when it comes to the issue of discipline, especially when it involves students who are minorities and living in poverty. Studies show that black students are subject to more frequent – and harsher – discipline than their peers, and that there are biases against them that begin as early as pre-kindergarten classes. Black students in Richmond, Virginia, recently filed a civil rights complaint against their school district, alleging that discipline practices there are unfair.

Ryan is black and is eligible for free lunches in Prince William County. The officer and the principal involved also are black, something the county noted in responding to the claims that the student was targeted by race.

Phil Kavits, a Prince William County schools spokesman, said he could not comment on the specifics of the incident, but he said it is not a race-related issue.

“All the key parties involved, including the principal and the police officer, are African American,” Kavits said in a statement. “The staff members are well known in our highly diverse community for their dedication and caring approach to all students.”

Robinson said the race of the people involved does not matter, that racial profiling can come from anyone.

“It’s not the players, it’s not the people who discriminate, it’s the whole system,” Robinson said, noting that his client has not been in trouble before. “The system is set up now so that school resource officers get to determine the impact on a person’s life.”

The Washington Post generally does not identify minors charged with misdemeanor crimes, but he and his family opted to speak publicly to bring attention to the matter.

The alleged theft happened on May 10, during the school’s regular lunchtime. Ryan said he forgot to grab milk when going through the line and then returned to get a carton.

Sgt. Jonathan Perok, a Prince William police spokesman, said the middle schooler “leaned back and pushed against the officer,” and then as the pair approached the principal, the teen tried to “push past the officer to get away.”

The family’s account differs. Shamise Turk, who works for the school district, said she saw surveillance footage of the incident and said it shows that her son didn’t conceal the carton of milk at all. She said he simply didn’t get one the first time he went through the line and went back to grab one.

Ryan says that after he got his milk, he sat down and was confronted by the officer. He said he put the milk back, but the officer told him to pick up the carton and take it to the principal. The teen said the officer grabbed him by his neck.

“It’s just unfair,” Ryan said. “Other people did that. One boy, I told him to get one for me before. But when I do, I get in trouble.”

The officer handcuffed the student at the school and ultimately placed the two charges against him. Both misdemeanors, the charges initially were going to be handled non-judicially through a diversion program, but Ryan and his family declined that option, and the matter will be going to court.

The teen’s mother said she’s hoping that what actually happened that day will come to light in the courtroom. She said the family declined a non-judicial punishment because her son is innocent.

“My son is not going to admit to something he did not do,” she said.

The student was quiet as he waited for a court hearing on Tuesday, his mom fluffing his curly hair while he took turns opening and closing the zipper of a sweatshirt and staring at his highlighter-colored sneakers. Robert Stanley, who works with the Prince William County branch of the NAACP, sat a few seats away.

“Our black boys are going from high school to prison,” Stanley said, referring to what is commonly known as the school-to-prison pipeline. He noted that the school resource officer involved in the arrest had several other juvenile hearings scheduled on Thursday, causing him “some real concerns.”

Kavits, the schools spokesman, said the officer works at the school daily and is an important member of the community, “ensuring the safety of students and staff.”

“He is well known to students,” Kavits said, adding that county school resource officers “strive to befriend students, to keep things positive, and to solve problems.”