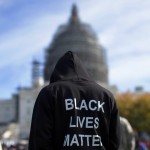 Thousands of people convened on the National Mall today to mark the 20th anniversary of the 1995 Million Man March.

Called the Justice or Else March, the event focused on policing and recent brutality cases against black men.

“I plan to deliver an uncompromising message and call for the government of the United States to respond to our legitimate grievances,” Nation of Islam leader and infamous anti-Semite Louis Farrakhan said in a statement.

Organizers said had they expected hundreds of thousands at the event, which, unlike its predecessor, was also open to women, whites, and other people of color. Read more at the Baltimore Sun.