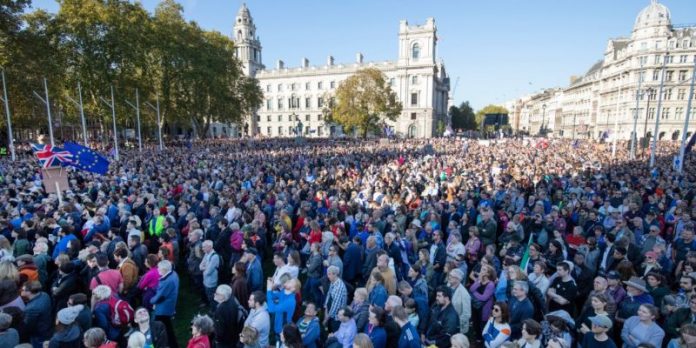 The struggle over Brexit spilled onto the streets of London on Saturday in a huge show of discontent, solidarity and frustration over the political limbo – as protesters demanded that the question be put back to the people with a fresh vote that would include the option of staying in the European Union.

Organizers say that more than 1 million people turned out for the “Put It to the People” march. If the official estimates go that high, it would make it one of the biggest demonstrations Britain has ever seen. The rally comes as an online petition calling for Brexit to be canceled surged past 4.5 million signatures.

The outpouring across central London is unlikely on its own to change the course of the Brexit impasse with time running out to decide Britain’s next moves. But the public outcry reflects an option that was once unthinkable: sending the entire question back to the voters.

Demonstrators from the Scottish Highlands to the Cornish coast descended on the British capital, filing out of buses and subway stations. They joined in pro-EU chants, waved EU flags, painted their faces in EU blue and hurled choice insults at effigies and images of Prime Minister Theresa May, who is hoping for one more, last-ditch attempt to push a Brexit plan through Parliament.

“Fromage not Farage,” said another, referring to pro-Brexit leader Nigel Farage. (And ironically a member of the European Paraliament.)

One dog carried in its mouth a rag doll that looked suspiciously like May.

The mass mobilization comes after a week of turmoil and confusion, where seemingly everything and nothing changed.

After a summit in Brussels, Britain’s Brexit Day was pushed back from March 29 until at least April 12, but remains unclear whether Britain will truly leave then or at a later deadline of May 22 or if it will leave at all.

May could try to muscle her twice-rejected deal through Parliament next week. But if that fails – and the odds are against her – then Britain could be headed for a softer Brexit, or a no-deal Brexit, or a general election or even, yes, a second referendum.

Since the Brexit vote in 2016, the prospect of a second referendum has gone from something once barely imaginable to something remotely possible.

Critics argue that a second referendum would be deeply damaging to democracy and a betrayal of those who chose to leave.

But a no-deal Brexit brings its own unsettling script. Britain has even staged dress rehearsals for some of the scariest scenarios of leaving the European Union without a firm breakup plan: possible medicine shortages and massive traffic jams for Continent-bound trucks now having to deal with customs controls.

Supporters of a second plebiscite say that the first referendum was a singular moment in time and point to allegations of rule-breaking by the campaigns for and against. Besides, they argue, shouldn’t people be allowed to have a say on the actual Brexit deal on the table – isn’t that democratic, too?

Brexit remains a divisive issue and, at times, the atmosphere has grown overheated – and toxic.

Anna Soubry, a lawmaker who quit May’s Conservative Party to join a new Independent Group, said she has received death threats for her pro-EU position on Brexit. She urged the public who supported a second referendum to come out on Saturday to deflate that kind of abuse.

Attitudes on Britain’s EU membership have shifted since 2016, when Britons voted 52 percent to 48 percent to leave the European Union.

For most of the past year, polls have shown a slight majority would now opt to remain in the bloc. Pollsters say that the small but persistent swing is partly down to changing demographics. Younger people are overwhelmingly pro-EU, and those teens who couldn’t vote in 2016 are now of voting age. The majority of voters 65 and older voted to leave the bloc, and some of them have since died.

“We weren’t given a chance to vote even though it’s our future,” said Amelia Theodorou, 17, who was holding a sign that said “Never Gonna Give EU Up.”

EU supporters, calling on the government to give Britons a vote on the final Brexit deal, participate in the ‘People’s Vote’ march in central London.

But if a do-over is going to happen, then it’s not just the people noisily cheering outside of Parliament on Saturday that need to get behind the idea. Only a handful of Conservatives lawmakers are calling for a second referendum, and while the opposition parties back the idea, support from some quarters seems lukewarm.

A second referendum would also take an estimated five months to organize, and there is the vexing issue of what to put on the ballot paper.

“It’s unlikely at the moment, simply because there just doesn’t seem to be support for Parliament,” said Anand Menon, a professor of European politics at King’s College London. But, he added, that in these febrile times, “anything is a possibility.”

The British prime minister has made it clear she is opposed to a second referendum. If she doesn’t pass her withdrawal deal on its third outing, however, then Parliament could start to seize control of the Brexit process. One option is to hold a series of “indicative votes” that would help to sift out what Parliament does want.

Some second referendum campaigners say that sequencing is everything and that a new plebiscite has the best shot of becoming a possibility if other options are first disregarded.

Of course, Britain could just cancel the whole Brexit mess. A petition to revoke Article 50 – effectively the EU exit papers – is now one of the most popular petitions on the British Parliament’s website.

But even though Britain can, in theory, pull the plug on Brexit, the more likely route to staying in the European Union would be by putting a vote to the people again.

That’s what Emma Knuckey, 38, said she wants. She voted to leave in 2016 in part because of the infamous red double decker bus with its claim that money sent to the European Union could instead be used to fund Britain’s national health-care system.

She’s no longer persuaded by the argument that Brexit would mean more money for Britain’s beloved health service and says she doesn’t like how EU citizens living in Britain have been used as “bargaining chips.”

“I’d rather put it to the people,” she said. “I don’t want people to be in any kind of limbo because I was swayed over by a mistake,” she said.