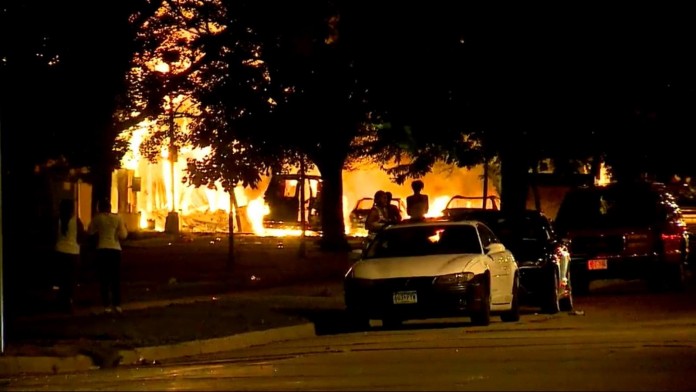 Angry demonstrators clashed with police in Milwaukee on Motzoei Shabbos after a police officer fatally shot a man who had a gun during a foot chase that turned deadly.

The violence erupted on the city’s predominantly black north side, an area beset with a history of violence and distrust between police and the community.

During a midnight news conference, Mayor Tom Barrett stood beside city leaders to plead for an end to the chaos that had been unfolding for hours on city streets, according to the Associated Press.

“We have to have calm,” Barrett said. “There are a lot of really good people who live in this neighborhood.”

“I commend the citizens who volunteered in clean-up efforts this morning,” the statement said. “This act of selfless caring sets a powerful example for Milwaukee’s youth and the entire community. I join Milwaukee’s leaders and citizens in calling for continued peace and prayer.”

“It is also important for citizens to know that Wisconsin is the first state in the nation to have a law requiring an independent investigation anytime there is a shooting by a law enforcement officer that leads to a death,” the statement added.

Saturday night’s conflict began with a traffic stop about 3:30 p.m., police said. After being pulled over, two individuals fled from the car, prompting the officer – a 24-year-old with six years of experience – to chase them, according to ABC affiliate WISN-TV.

The 23-year-old suspect – who has not been identified by police – died at the scene, the station reported. A second 23-year-old man was taken into custody, police said.

“That officer had to make a split-second decision when the person confronted him with a handgun,” Milwaukee Police Assistant Chief Bill Jessup told reporters at the scene, according to WISN. “This is a risk they take every day on behalf of our community.”

Within hours of the shooting, a crowd began to engage in skirmishes with police on the north side that stretched late into the night, according to the Milwaukee Journal Sentinel.

The paper reported that the tension began when the crowd confronted officers who had arrived near the scene of the shooting in riot gear. When officers began to leave the scene, some members of the crowd “started smashing the windows and side of a squad car” and “another vehicle was set on fire,” the paper reported.

When police returned to the location with more riot gear, someone in the crowd fired shots into the air, the paper reported.

A reporter and a photographer from the paper were then chased from the scene and assaulted by someone in the crowd, the Journal Sentinel reported.

A gas station was set on fire about 10 p.m., police said, but firefighters could not reach the site because of gunfire. Three people working inside the station got out safely, police said. Fires were also started at multiple businesses, including a bank, a beauty supply company and an O’Reilly Auto Parts store, according to WISN.

By 2 a.m., a supermarket and a liquor store also had been set on fire, the station reported.

Police said three people were arrested throughout the night.

Barrett said at the news conference that young people had encouraged others to join them by spreading news of the violence on social media, according to the Journal Sentinel. He implored parents to contact their children and bring them home and said police had “shown an amazing amount of restraint” amid the violence, the paper reported.

“Our police officers are doing everything they can to restore order,” he said. “If you love your son, if you love your daughter, text them, call them, pull them by their ears, get them home.”

Near the end of the news conference, Alderman Khalif Rainey linked Saturday’s violence to the ongoing tension between police and frustrated black Milwaukeeans, the Journal Sentinel reported. He called the area where the shooting occurred “a powder keg.”

“This entire community has sat back and witnessed how Milwaukee, Wisconsin, has become the worst place to live for African-Americans in the entire country,” Rainey said. “Now this is a warning cry. Where do we go from here? Where do we go as a community from here?

“Do we continue – continue with the inequities, the injustice, the unemployment, the under-education, that creates these byproducts that we see this evening? … The black people of Milwaukee are tired. They’re tired of living under this oppression. This is their existence. This is their life. This is the life of their children.”

Police told the Journal Sentinel that the officer was wearing a body camera when he fired at the fleeing suspect. The paper reported that the man was struck once in his chest and once in the arm.

The officer was not injured.

Capt. Mark Stanmeyer told WISN that the man who was killed had a “lengthy arrest record.” Police said he was carrying a semiautomatic handgun traced to a burglary in March.

The Wisconsin Department of Justice’s Division of Criminal Investigation will lead a probe of the shooting, WISN reported.