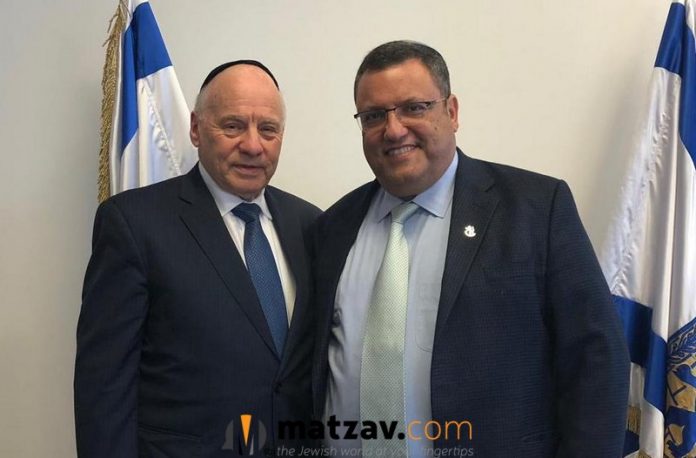 Menachem Lubinsky, co-chairman of the ICHH, thanked MK Rabbi ben Zur for taking the initiative and ending the current situation “where the handicapped are routinely ticketed.” He urged the Mayor to take urgent action so that “those who are physically challenged do not suffer further injustice with the lack of special courtesies that should be extended to them.” Mr. Lubinsky revealed that the ICHH has received numerous complaints from the disabled especially of late when thousands of Jews feel secure enough to visit Har Hazeieim once again.

Established in 2010, the ICHH with chapters in many cities around the world, was successful in getting the government to install 173 surveillance cameras, a police station, the restoration of some 20,000 graves, new fencing, and regular sanitation and many upgrade projects.  Despite these improvements, the ICHH is forever vigilant against any signs of recurring vandalism, including stone throwing which plagued the cemetery for many years.

One of the ICHH’s major achievements was the establishment of the Knesset Caucus on Har Hazeisim by Knesset Speaker Yuli Edelstein. Its 67 members, the largest caucus in the outgoing Knesset, includes Knesset members from all factions with the exception of the United Arab List. Amongst the many plans of the ICHH is the construction of a Visitor Center in partnership with the national and municipal governments. This joint effort will immeasurably enhance the security of Har Hazeisim, especially since a permanent police station will be housed in the building.

Some 2000 people visit Har Hazeisim daily, a far cry from the less than 200 that frequented the cemetery in 2015. Tens of thousands visit such holy kvarim as the Ohr Hachaim, Bartenura and all the other luminaries buried on the 3000-year old cemetery that dates back to the days of the Nevi’im.