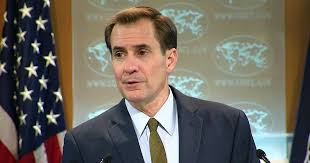 The State Department acknowledged today that it delayed releasing a $400 million cash payment to Iran in January until it was assured that a plane carrying three released American prisoners had left Tehran.

State Department spokesman John Kirby told reporters that negotiators had “deliberately leveraged” Iran’s desire to get its money from a decades-old arms deal to make sure the authorities there would not renege on freeing three Americans. They were flown out Jan. 16, the same day the nuclear agreement between Iran and six world powers was implemented.

“We felt it would be imprudent not to consider that some leverage in trying make sure our Americans got out,” Kirby said, noting the deep mistrust between the countries.

Kirby’s remarks marked the first time the administration has acknowledged there was any degree of linkage between separate negotiations for the release of five Americans, including two who left Iran independently, and money paid to Iran in foreign currency piled onto pallets aboard an Iran Air cargo plane in Geneva.

Kirby insisted, however, that there was no quid pro quo of money for prisoners.

“We don’t pay ransom,” he said. Rather, he added, “there were opportunities we took advantage of, and as a result we got American citizens back home.”

Mark Dubowitz, executive director of the Foundation for Defense of Democracies and a critic of the deal, called the State Department’s admission “the very definition of ransom.”

“They can continue holding Americans against their will until the next White House cash payment,” he said. “It is a dangerous precedent, and one that puts all Americans abroad in danger.”

The $400 million flown to Iran that day was the first installment in a $1.7 billion settlement, part of a long-standing dispute over an arms deal that fell through when the shah was overthrown in 1979. The total, which has since been paid in full, represented money that Iran had paid for military equipment that was never delivered, plus interest and inflation over 37 years.

But critics have said the carefully choreographed payment was, in effect, a ransom paid in violation of U.S. policy intended to discourage hostage-taking.

Many Republicans in the House and Senate who opposed the nuclear deal with Iran initially suspected that the payment was ransom for the freed Americans, who included Washington Post reporter Jason Rezaian. But a firestorm over the trade was reignited this month when the Wall Street Journal reported that the money had been paid in cash around the time of the prisoner release.

On Aug. 3, the day the news broke, Kirby tweeted: “Reports of link between prisoner release & payment to Iran are completely false.”

On Thursday, however, Kirby said, “The events came together simultaneously.”

“Given the fact Iran had not proved completely trustworthy in the past, it would have been imprudent and irresponsible to not hold that money up,” he said.

The State Department has not given a precise timeline of when the cash was delivered to the Iranians and when the flight bearing the money took off from Geneva. The flight carrying the freed Americans was delayed leaving Tehran, in large part because U.S. officials had trouble locating Rezaian’s wife and mother so that the women could also fly out of Iran with the freed men.

Kirby also announced yesterday that an internal review is inconclusive about what or who deleted an embarrassing chunk of video from a news briefing over the administration’s talks with Iran.

Kirby said the Office of the Legal Adviser interviewed more than 30 current and former State Department officials trying to determine why there was a sudden flash of light and an eight-minute gap in the video of a 2013 news briefing. The State Department acknowledged this year that there was an unexplained cut made just at the point when a Fox News reporter asked whether the administration had lied about secret talks with Iran.

Initially, the State Department blamed the deletion on a technical “glitch.” Then, three weeks later, it said the excision had been “deliberate.” Now, after three months of investigation, Kirby said that it was not clear what happened, or how, and that it may have been a glitch after all.

“We’re not sure if it was done with intent to conceal or due to a technical problem,” he said. “Bottom line, it was inconclusive.”