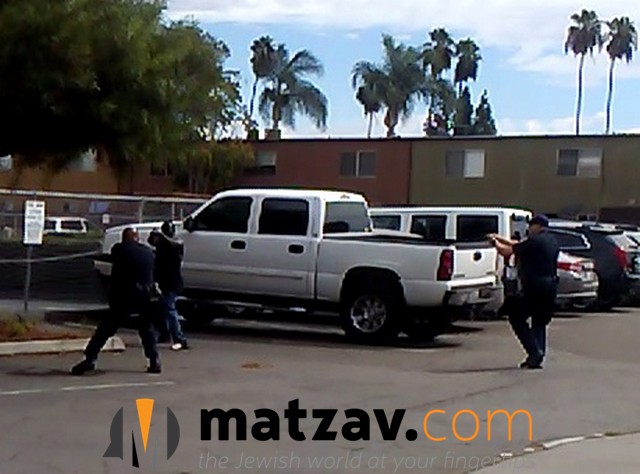 EL CAJON, Calif. – Police in this city near San Diego shot and killed an apparently unarmed black man within a minute after arriving at a strip mall here Tuesday to answer a call of a man acting erratically, a police official said Wednesday.

Two officers had arrived at the scene about 2:10 p.m., said El Cajon police department spokesman Lt. Rob Ransweile. When the man pulled something from his pocket and took “a shooting stance,” an officer opened fire, hitting the man multiple times. The shooting happened at 2:11 p.m., Ransweile said.

Relatives identified the man as Alfred Olango and described him as “mentally challenged,” saying that his sister had called police to say that he was walking in traffic and “not acting like himself.”

The police and the county district attorney will both investigate the shooting, officials said. Residents who gathered at the scene Tuesday night and on Wednesday called for authorities to release video footage showing what happened.

Olango’s death came as tension lingers in Charlotte over a deadly police shooting there a week earlier, which sparked a renewed focus nationwide on how officers use deadly force, and it prompted protests and a prayer vigil in this city in Southern California. In an interview with a local radio talk show host, Mayor Bill Wells said he expected demonstrations to be peaceful but said the local police force, with 120 officers, “has more than enough manpower to handle whatever comes.”

Later addressing a news conference, Wells said he is willing to meet with the protesters. “We are open to dialogue. We are open to listening to your complaints,” he said. “I am begging El Cajon to remain peaceful and harmonious place.”

Promising transparency in the investigation, Wells said he has viewed the entire video and that once the public sees it, they will be able to determine what happened. On Tuesday, police released a still shot from the video that purported to show the shooter’s stance.

Without going into the details of the incident, Wells said he was concerned about the time it took for the police to respond to the call from when the victim’s sister.

When police responded, Olango initially “refused multiple instructions by the first officer on the scene and concealed his hand in his pants pocket,” Jeff Davis, the city’s police chief, said during a news conference. Davis said a second officer arrived and was prepared to use a Taser to stun Olango, who was pacing while officers spoke to him.

“At one point, the male rapidly drew an object from his front pants pocket, placed both hands together on it and extended it rapidly toward the officer, taking what appeared to be a shooting stance, putting the object in the officer’s face,” Davis said.

As one officer used the Taser to try to subdue Olango, “simultaneously, the officer who had the object pointed at him” fired his gun and hit Olango, Davis said. No gun was found at the scene, he said.

Police say Olango, 38, was struck multiple times, given first aid at the scene and pronounced dead at a hospital. The two officers involved, who have not been identified, have been placed on three-day administrative leave.

Friends said that Olango may have suffered a seizure before the incident on Tuesday. Olango was an immigrant from Uganda who was working as a cook, relatives said Wednesday.

Olango had a series of run-ins with police in San Diego County and Colorado, according to court records. He had convictions for car theft, burglary and selling drugs and had served time in prison.

Mental health issues are a factor in about a quarter of fatal police shootings, according to a Washington Post database tracking such incidents nationwide. Olango was at least the 716th person shot and killed by police this year. In 2016, 172 of those who have died had mental health issues.

Police are on pace to shoot to death about the same number of people this year as last year, when officers fatally shot nearly 1,000 people. People with reported mental health issues account for about one in four of the fatal shootings this year, the same share as last year.

Experts say such shootings highlight the issue of how often police are called to respond to people in mental or emotional crisis — and whether police training adequately prepares them to handle those calls.

In most cases last year where people with reported mental illnesses were fatally shot by police, police were responding because relatives or bystanders were worried about the person behaving erratically; last year, this included dozens of explicitly suicidal people.

On Wednesday morning, about three dozen residents held a news conference outside police headquarters to demand the release of the full video of the incident. Tension building from other controversial shootings nationwide was evident in this blue-collar, mostly white city of 103,000.

“I have been a black man for 56 years. None of this is new to me,” said Eddie Price. He implored reporters to tell how black people are treated by police.

“I am tired of walking around like I am a target, like my son is a target,” he said.

One person held a sign that read “Stop the genocide,” while activist Armand King, 34, said “the police murdered someone last night.”

Mallory Webb, president of local NAACP Youth Council, called for an end to “these senseless killings” and said the killings of black men by police are “the modern-day equivalent of lynchings.”

Davis, the police chief, asked residents to allow time for the shooting in El Cajon to be investigated thoroughly. He promised transparency and said that “this will be looked at by many sets of eyes, not just ours.”

Video of the immediate aftermath of the shooting was uploaded to Facebook Live by Rumbie Mubaiwa. The footage shows a woman, reportedly the sister of the victim, wailing uncontrollably and repeating the phrase, “You just killed my brother.”

“I called you to help me, but you killed my brother,” the sister said.

In a recorded interview with KNSD, Michael Rodriguez, who said he had been 15 to 20 feet away from the shooting, said, “I see a black male coming out with his hands up.” According to Rodriguez, three officers approached the man, and when he tried to run, Rodriguez said, they fired five shots into his torso.

But the man’s sister told KNSD that her brother was not showing his hands to police and was not complying with the police’s orders.