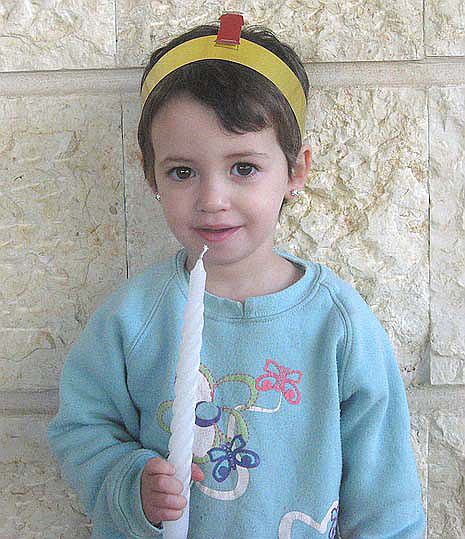 A little more than a year after her daughter passed away, Adele Biton’s mother, Mrs. Adva Biton, has given birth to a baby boy.

Adele was a four-year-old girl who was critically wounded in a terror attack three years ago. She died last winter of lung infection-related complications.

The attack in which Adele was hurt occurred on March 14, 2013 near Ariel, when a truck driver suddenly hit the brakes after his vehicle was struck by stones hurled by Palestinians. The car behind him, carrying Adele, her two sisters and their mother, lost control and collided with the truck. The two other sisters, Avigail and Naama – aged four and five – sustained moderate injuries.

When recounting the night of the accident, Adva noted that immediately after the crash she had looked at the back seat and “saw Adele with her head dropped to the side. I put out my hand to make sure the head was attached and to open the airway. She had a very slow pulse.”

Following the attack, Adele was hospitalized at the Schneider Children’s Medical Center and was later transferred to the Beit Levinstein rehabilitation center in Ra’anana. Adele later returned to her home in Yakir after a prolonged period of treatment.

Last winter, Adele began to feel ill and suffered from a cough. Her condition deteriorated and she passed away after a two-year battle.

Her mother said that she felt Adele’s presence at the birth of her new baby. “Those were moments of siyata diShmaya, and Adele was there to make sure everything would be okay. She came to help me.”