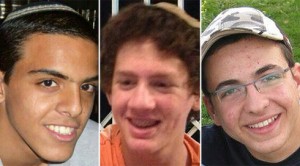 The three teens who went missing in the West Bank have been abducted, Prime Minister Bibi Netanyahu declared tonight, vowing that Israel would find them and bring them home.

The prime minister, grim-faced and flanked by IDF Chief Benny Gantz and Defense Minister Moshe Ya’alon, was speaking after a special security assessment with the two and senior IDF officials. He said that Israel views the Palestinian Authority as responsible and demands its full cooperation.

The three – Eyal Yifrah, 19, Gil-Ad Shayer, 16, and Naftali Frenkel, 16 – have been missing since Thursday night, and a massive manhunt has been in ongoing since. The current assessment is that the boys were kidnapped, but are still alive and somewhere within the West Bank.

“We are in the midst of a massive operation to find and return the three missing youths,” Netnayahu told the press conference.

“In light of the situation I cannot say everything, but I can say the following: Our boys were kidnapped by a terrorist organization.”

A Hamas online forum on Friday night carried the claim that the al-Qaeda linked Islamic State in Syria and the Levant (ISIL) were responsible for seizing the three youths, however it is unclear if this was the prime minister’s intention.

Netanyahu outlined his instructions to security forces, “to implement all the tools we have to find them (and) prevent their transfer to Gaza or another place (and) prepare all of our forces for any possible scenario.”

He also asserted that despite the fact that the culprits were not affiliated with the Palestinian Authority, Israel demands “from the PA and its leader (Palestinian President Mahmoud) Abbas – from whose area the kidnappers undertook their mission – to aid us in our search operation.”

Netanyahu rejected claims that the attack was not the PA’s responsiblity.

“We see in Abbas and the PA as responsible for any terror act undertaken on its territory, be it in the West Bank or Gaza,” he said.

“The claim that the PA is not responsible because the kidnapping took place in an area controlled by Israel is blatantly false,” he said.

Netanyahu said he had been in touch with the families of the missing teens, and paid tribute to their resilience.

“I spoke with the parents before Shabbat, and I told them we are doing everything Israel can do to bring their kids – our kids – back home. These parents expressed strength and restraint which are commendable in such a difficult hour. In these dark hours, the nation’s heart is with the families.”

Opposition Chairman Isaac Herzog told Ynet on Saturday that he had spoken with US Secretary of State John Kerry, and was updated regarding the latter’s conversation with the Palestinian President Mahmoud Abbas.

“Abbas told Kerry they are cooperating with the effort to find the missing teens, and that the PA are using all their power to help them.”

Herzog further said that “a powder keg is rolling our way. I am concerned about the situation would deteriorate and I hope that the security forces and police are preparing to make sure no redundant altercations take place,” referencing growing fears that settlers and Palestinian will clash overnight in wake of the kidnapping.

More than 2,000 IDF forces have been dispatched to the West Bank to search for the boys. IDF Spokesman Brig. Gen. Motti Almoz said the current mission was to return the boys home safely. “We are concentrating all of our intelligence efforts on trying to track down the missing individuals,” he said.

Even so, an IDF source told Ynet that the current assessment was that the searches would not end today. He said that based on past experience, the military believes that the three are still in the West Bank.

Gantz met this morning with MIlitary Intelligence chief Aviv Kochavi, the head of the IDF Operations Directorate Yoav Har-Even, GOC Central Command Nitzan Alon, and the commander of the Judea and Samaria division Tamir Yаday for a situation assessment.