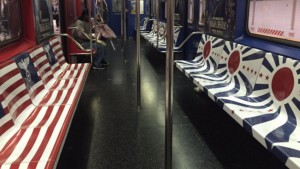 Amazon has a new video series coming out about what it would be like if the Axis powers had won World War II and America was under German and Japanese control.

To simulate what that control might be like, Amazon decked out a New York City S train with images of the US flag with a German imperial eagle and iron crosses on one side and Japanese rising-sun flags on the other.

While the Amazon images don’t actually feature the Nazi swastika, the version of the eagle and cross is very similar to the eagle emblem used during the Third Reich.

The marketing campaign definitely conveys the point of “The Man in the High Castle” — what our life would be like if the US had lost the war — but some commuters are not so happy to be finding themselves surrounded by Nazi-like insignia when getting on the train.

“Half the seats in my car had Nazi insignia inside an American flag, while the other half had the Japanese flag in a style like the World War II design,” one subway rider told The Gothamist. “So I had a choice, and I chose to sit on the Nazi insignia because I really didn’t want to stare at it.”

The MTA confirmed to the Gothamist that the ads had been approved and were scheduled to run through mid-December. We’ve reached out to Amazon for comment and will update if we hear back.