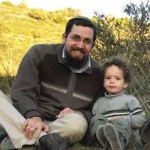 About one month after the murder of the Henkin couple in front of their four children, the intentions of the terrorists have now been revealed. Yahia Hajj Hamad, one of the terror suspects, said during his interrogation that he belongs to the Hamas organization for two years already and that he initially sought to act alone. Later, Hamad recruited the rest of the cell that carried out the Henkin murders, he said.

He purchased firearms with his own money “in order to engage in operations against Israeli targets,” an act that led to the murder of the Henkin couple in full view of their four children.

Following the murder of three members of the Dawabsha Family whom succumbed to the wounds inflicted upon them in the firebombing of their home in the village of Duma by suspected Jewish extremists, they decided to take revenge. A few days later, the group of terrorists agreed that they will open fire towards an Israeli target.

Samir, another accomplice in the murder, said: “Another one of the members explained how I should shoot and gave me the weapon in a bag.” A separate investigation indicated that the terror cell also considered kidnapping an Israeli settler.

Hamad described the murder: “We saw a white Israeli car. I asked Samir [the driver] to overtake the car and that’s when I opened fire. I fired 10 or 15 automatic rounds at the vehicle,” he said. “At a certain point, the Israeli vehicle stopped, so we did too. I got out of the car with the gun, took out the magazines of ammunition, put a new one in and went over to the woman who was sitting next to the driver.”

At that point, according to him, Naama Henkin was not yet injured. Hamad described how, as he was approaching Naama Henkin, the wounded Eitam Henkin was struggling with Karam (another terrorist involved in the shooting), as he was attempting to take away his gun. Hamad began shooting at Eitam, killing him on the spot but also wounding his accomplice, Karam. “I was attacked by the woman; I also shot several bullets at her as well and killed her on the spot,” he added.

Hamad said that he “saw that inside the car were three or four children but I didn’t fire at them. We got into our car and drove away.”

In a separate interrogation Hamad told the investigators: “Islam forbids it the murder of children. My character also didn’t allow me to kill a baby or hurt children. Our religion believes in blood for blood; therefore, the settlers should realize that everything they do has a price. Thus, in the future, they will think a hundred times before they harm Palestinians.”

After the attack, a member of the Hamas terror organization called him: “I said I was with my girlfriend and that we should have a cocktail. He understood that we successfully carried out the attack.”

Hamad did not express remorse for killing the couple. He concluded: “I do not regret the murder because I believe the people I killed are not innocent people.”