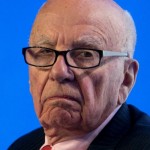 The media mogul tweeted that though Trump, who he has previously called “embarrassing,” is a “very serious candidate,” Bloomberg should be the “next billionaire candidate” to step into the ring.

Murdoch later responded to complaints that Bloomberg was a “nanny state” mayor, adding that he agreed, but that the mayor was a great “philanthropic executive” who, along with Rudy Giuliani, made New York City the greatest.

Murdoch then sent a tweet explaining he wouldn’t vote for Bloomberg if he ran, but that he was a “friend I admire.” Read more at CNN Money.