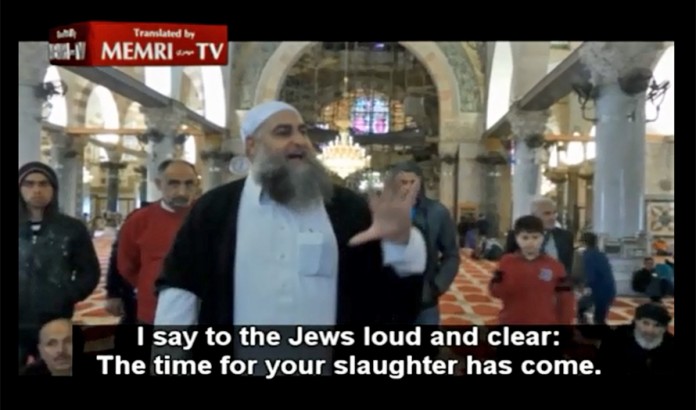 A Muslim cleric has been convicted of incitement for giving speeches on the Har Habayis in which he said that Jews should be “slaughtered” and that they were similar to “apes and pigs.”

The decision was issued by Jerusalem Magistrates Court Judge Shmuel Herbst, convicting Abu Sara of incitement to violence and of publishing incitement to racism.

According to the indictment, Sheikh Abu Sara spoke at the Qibli Chapel of the Al-Aqsa Mosque in November 2014 on “the characteristics of the Jews according to the Quran.” The speech was cheered by the audience, filmed, and uploaded the following day to YouTube.

In the speech, Abu Sara likened Jews to “apes and pigs” and accused them of murdering the Islamic prophet Muhammad, along with other prophets. He also said the Jews need to be slaughtered.

In his verdict, Judge Herbst said that “when I look at the defendant, I see a human, and it is a great shame that when he looks at me, he sees an ape or a pig, destined to be mercilessly exterminated.”

“Jews and Arabs live side by side in Israel, and this will not change,” Herbst went on. “The defendant and his ilk inflame constant tension that starts with speeches and ends with the current documentation of children and youth holding knives and directing them to the bodies, flesh, and throats of members of another nation.”

“It is time to stop this incitement, on the Internet, in gatherings, and in places of worship,” he concluded.

The complaint was filed by the Honenu legal aid organization on behalf of Yehuda Glick, a well-known advocate of Jewish rights on the Temple Mount, shortly after Glick survived an attempt on his life by a Palestinian terrorist.

In response to the conviction, Honenu welcomed the decision but added that “unfortunately, when it comes to incitement against Jews, it is up to citizens and organizations to help the legal system do its job. We hope this policy changes and that the police and state prosecutor do their job faithfully.”

“I hope he receives the punishment he deserves,” commented Yehuda Glick. “I also hope it deters others and that the Temple Mount can return to being a center for peace and not for incitement.”