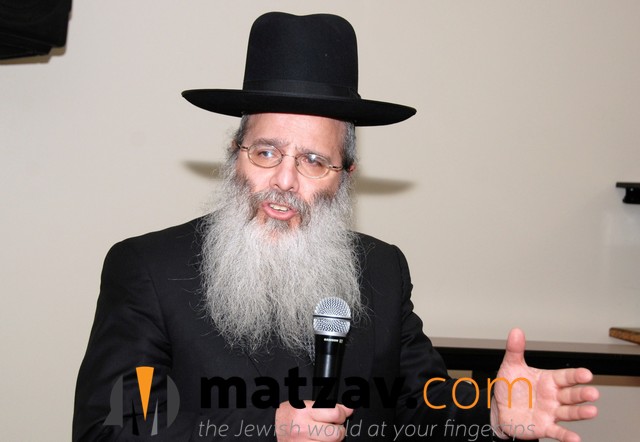 The Hit and Run Accident

The Two Cups of Salt
The above scenario is similar to a question asked of Rav Shlomo Zalman Auerbach Zt’l. The grocer in a Makolet (grocery)in Eretz Yisroel by mistake measured out two cups of salt and sold it to a housewife who needed two cups of sugar. Is the grocer liable for his mistake when the housewife baked a cake and ruined it, using the cups of salt instead of the sugar she really needed?
Rav Shlomo Zalman quotes the Gemora in Bava Kama which discusses a Bor HaMisgalgel, the rolling pit which damages. If someone places amichshol, something which can cause damage similar to a pit, such as a rock, and that rock is then kicked by a person or an animal, the one who placed the michshol is not liable. Although we could have thought that both are partners in this mishap, Tosfos has a girsah in the Gemora that “if the rolling rock damaged as it is rolling then Kocho Hoo – he the kicker is the one empowering the rockand therefore only he is held liable versus the one who placed the rock there.
Tosfos then asks a contradiction from the Gemora which states that if a person and an ox push another animal into a pit which causes damage all three are held responsible i.e. the person, the ox and the owner of the pit. What is the distinction between the rolling Bor and this case? Why in the first case is the owner of the pit i.e. the one who placed the rock not held liable and in the second case the owner of the pit is held liable?
Tosfos responds that we must say that the case of Bor HaMisgalgel is speaking where the kicker did it intentionally whereas in the case of the animal being pushed into the pit, the push was done inadvertently. When the act is done intentionally by the kicker, the owner of the pit is free from liability. His responsibility has been removed by the intentional act of the kicker. However, when the pushing into the pit is done without intent, the owner of the pit is not free from liability. His responsibility remains intact.

The Apparent Conclusion
Based on the above Rav Shlomo Zalman says that we can conclude that if in the case of Bor HaMisgalgel the kicker had kicked the rock inadvertently and caused damages then indeed he would not remove the liability from the owner of the rock who had placed it on the ground. They both would beShutfim, partners in the liability. Therefore in the case of the grocery we can say that the grocery owner is liable for damages because he had placed the Bor, in this case the salt, in the containers which the women purchased thinking it was sugar and then inadvertently ruining her cake. In such a scenario the inadvertent act of the woman does not absolve the grocery owner from liability.
Returning to the original hit and run case it would seem that the furniture company can be held liable. The company has hired a driver who inadvertently was in an accident. He did not plan to be in an accident. Based on Bor HaMisgalgel we can say that here too the inadvertent act of the driver does not remove the responsibility of damages caused by the moving Bor i.e. the truck from the company. The company can be gone after to pay for damages. However this is only a superficial understanding. Further analysis of Tosfos would demonstrate that this conclusion is far from simple.

Further Analysis of Tosfos
The Chazon Ish in Bava Kama Siman 2:21 asks an apparent contradiction from the beginning of Tosfos to its end. Upon deeper reflection it would seem that the two cases we are discussing are in fact the same and yet have different concluding Halachos. In the first case the rolling Bor is inadvertently kicked by the man or animal as the Gemora says the rolling Bor is being rolled underfoot of the human or animal, clearly indicating that there is no premeditated intention to kick. However there is negligence involved. According to Tosfos that is why the Gemora refers to it as Kocho – the force was so strong that it caused damage and through that powerful force it removed the culpability from the one who placed the rock on the ground – the Baal HaBor, the owner of the pit who is completely exonerated.
In the second case of the animal pushed into the Bor there is also peshiya, negligence. We know that from the fact that if a human would have been pushed into the Bor and damages would have occurred, the pusher would have been obligated to pay for four items of chavala. Chavala, damage to a human can only cause that kind of liability if there is peshiya. Nonetheless, since it was inadvertent, there is a shared culpability with the owner of the pit.  What distinction, asks the Chazon Ish, is there between the first case of Tosfos where there is negligence and inadvertent damage and the owner of the pit is patur, is exonerated and the second case which also has negligence and inadvertent damage and the owner of the pit is liable?

The Distinction of the Chazon Ish
The distinction centers around how we view the Bor that was put into the middle of the Reshus HaRabim, the street. In the second case of Tosfos we are speaking about a true Bor, an actual pit that was dug out in the middle of the street. That is the classic case of an obstacle placed in the public domain waiting to cause damage. Here we have a pre-existing Bor which the pusher inadvertently used to cause damage. There the inadvertent act of the person pushing the animal into the pit, although done with negligence, does not absolve the owner of the pit from liability. They remain partners in the liability. However, a rock placed in the public domain does not yet have on it the name of an item which causes damage. It is not necessarily considered a definite damaging item. It is only the person who kicks it who causes it to become like a moving fire which causes damage. Here, says the Chazon Ish, since the kicker through his negligence is forming the actual item which is to cause damage, although done inadvertently, this is enough to remove liability from the one who placed the rock there.

Conclusion
Based on the above we can make a distinction between the sugar and salt case and the furniture truck case. In the sugar and salt case the store owner is causing the damaging item as he fills the containers with salt. There indeed the inadvertent use of the salt by the woman does not exonerate the store owner from liability. However, in the case of the truck we cannot say that the company has caused a Bor HaMisgalgel when they hired the driver to drive the truck for them. It is the driver who has, through his negligence, caused the truck to become a damaging item and therefore although the accident was inadvertent, the driver through his negligence, and not the company, remains responsible. It is the driver who has created the damaging item and not the company. He is liable. They are exonerated.