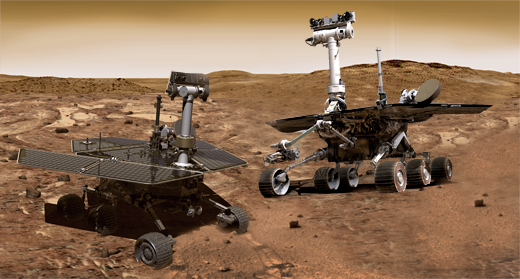 In June, NASA invited a small horde of robots and their makers to Massachusetts to compete for a chance to win as much as $1.5 million.

The Sample Return Robot Challenge, one of NASA’s Centennial Challenges, is designed to simulate the object retrieval tasks and abilities of rovers operating far from Earth. The competition, held at Worcester Polytechnic Institute, drew about 20 teams this year, vying to pass level one to qualify for the round with the big prize. Five made it.

NASA holds the competition to crowdsource ideas from robot geeks ranging from high school and college students to retired couples and families of diverse backgrounds. While NASA says it hasn’t incorporated anything from the challenges into the real rovers yet, some competitors have used the experience they gained to start companies.

For level one, the robot has to move around unfamiliar terrain on its own, find and carefully collect objects, and return to home base. Because the competition is meant to simulate what rovers on the moon or Mars would do, the robot can’t use any sensors that we take for granted, such as those that depend on satellites or our planet’s magnetic field. That means no compasses, no GPS.

It also can’t have systems that require the presence of an atmosphere. The robot has to complete the task in less than 30 minutes, all without being allowed to move faster than walking speed.

– Step 1: Find what NASA calls the “pre-cached sample.” It looks like a pirate hook and is the most important object. It represents a sample that’s already been identified and just needs a rover to retrieve. The robot should already have all the data about this one.

– Step 2: Collect the sample. Creators have come up with a number of ways for collection. One is to sweep the sample into a box; another involves a claw-like mechanism to grasp the object and lower it onto the robot.

– Step 3: Find and collect the purple rock. Competitors know the size and weight of the rock but don’t have all the data to give their robots.

– Step 4: Find and return to base. This is harder than it sounds, because the location isn’t predetermined or loaded up. Remember, no GPS.

The five competitors that passed each walked away from the event with $5,000 in prize money. These five, plus a couple more from previous years that had already passed level one, will reconvene in September to take on level two. To win the grand prize, the robots will have to collect many more objects, including ones that will be much more difficult to identify.

May the best thing win.