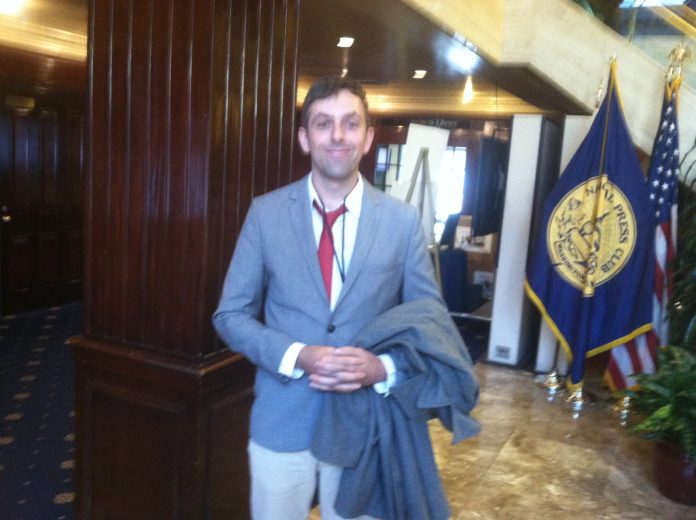 Tony Hovater, the white nationalist and Nazi sympathizer featured in a controversial New York Times story this weekend, said he lost his job and would soon lose his home following a swift backlash over the article.

Hovater, a 29-year-old Ohio resident, told The Washington Post on Wednesday that he has been fired from his job and that he and his wife, Maria, are in the process of moving out of their home in New Carlisle, Ohio, for financial and safety reasons. They could no longer afford to pay the rent, he said, and somebody had published their home address online.

“It’s not for the best to stay in a place that is now public information,” he said, adding later: “We live alone. No one else is there to watch the house while I’m away.”

The lengthy Times profile that was published Saturday portrayed the daily and seemingly normal life of Hovater, whom writer Richard Fausset described as the “Nazi sympathizer next door” and a “committed foot soldier” of the far-right movement. The story also described Hovater as a “Seinfeld” fan whose “Midwestern manners would place anyone’s mother.”

Hovater said that he, his wife and his brother-in-law were fired on Monday. All three worked at 571 Grill & Draft House, a restaurant in New Carlisle.

Hovater said the restaurant, where he worked as a kitchen manager for about a year and a half, received harassing calls Monday morning demanding that he be fired. One of the owners later became concerned about employees’ safety and told him to leave, he said. His wife and brother-in-law were fired shortly after.

Hovater said that before the owners fired his brother-in-law, they asked him if he has the same beliefs as Hovater.

A marketing firm that represents 571 Grill said Wednesday that the restaurant is preparing to release a statement.

Hovater, who also contracts as a welder, said he wasn’t surprised at his former employer’s decision to fire him, though he thought it was “a little hasty.”

“Businesses will do what they have to do to protect their businesses,” he said.

After Hovater was fired, his supporters launched a crowdfunding campaign through a website called Goyfundme.com to raise money for him and his wife.

“Tony was fired from his job for his political beliefs. His wife and family all fired all at once to avoid the political pressure,” Matt Parrott, who runs the site, said, adding that the “nationalist community” has rallied behind the Hovaters.

The campaign has raised more than $6,000 as of Wednesday afternoon.

According to the website, the Times article “resulted in a smear campaign” against Hovater and his wife. It claimed that “communists, antifa, and general basement-dwelling ne’er-do-wells set to work immediately, identifying their place of employment and harassing their management into terminating them.”

Goyfundme.com, which relies on bitcoin and credit and debit card payments, is an alternative crowdfunding site created earlier this year after mainstream fundraising sites like GoFundMe and PayPal removed campaigns and accounts associated with far-right ideologies. Parrott condemned “active censorship” and what he sees as the lack of net neutrality among the sites.

Hovater and Parrott are both co-founders of the Traditionalist Worker Party, one of the extreme right-wing groups that rallied in August in Charlottesville, Virginia, where a car allegedly driven by a Nazi sympathizer plowed into a group of counterprotesters, killing 32-year-old Heather Heyer.

The aftermath of the Charlottesville rally was the genesis of the Times profile story on Hovater, national editor Marc Lacey said in a column responding to widespread criticisms of the story. Many have accused the Times of normalizing a man who unabashedly supports Adolf Hitler.

“We described Mr. Hovater as a bigot, a Nazi sympathizer who posted images on Facebook of a Nazi-like America full of happy white people and swastikas everywhere,” Lacey wrote.

Later, he added that the Times regrets the story offended so many.

“We recognize that people can disagree on how best to tell a disagreeable story,” Lacey wrote. “What we think is indisputable, though, is the need to shed more light, not less, on the most extreme corners of American life and the people who inhabit them. That’s what the story, however imperfectly, tried to do.”

He wrote that he and his editors had hoped to understand why someone like Hovater, who’s “intelligent, socially adroit and raised middle class amid the relatively well-integrated environments of United States military bases,” drifted toward an extreme political ideology. Fausset acknowledged that his story, after multiple revisions and despite hours of conversation with Hovater, never really answered that question.

“Mr. Hovater was exceedingly candid to me – often shockingly so – but it seems as though his worldview was largely formed by the same recombinant stuff that influences our mainstream politics. . . . But even if I had called Mr. Hovater yet again – even if we had discussed Blavatsky at length, the way we did his ideas about the Federal Reserve Bank – I’m not sure it would have answered the question.”

Hovater said he thought Fausset would “editorialize” the story, but he said the article “was immensely fair.”

“A lot of people were confused with what he was trying to do with that story. He’s not trying to set out and spook people,” Hovater said. “He wrote the article, he wrote the story that was given, and it was an accurate portrayal of me.”

Hovater said he and his wife are now staying with a friend. He also said he still expects some income from his contractual job as a welder.