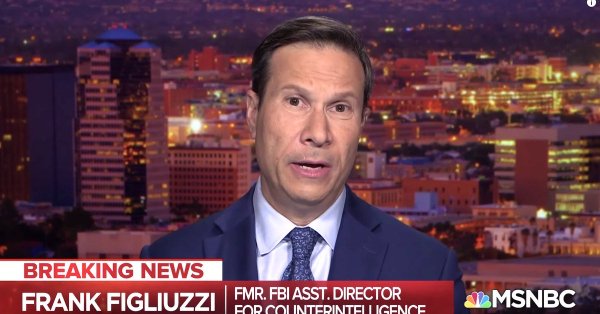 Frank Figluizzi, an NBC News national security contributor, said during an appearance on MSNBC Tuesday night that President Trump erred in ordering flags to be flown at half mast because of the mass shootings in El Paso, Texas, and Dayton, Ohio, because of the importance of Aug. 8 to white supremacists.

Figluizzi, a former FBI assistant director of counterintelligence, said Trump’s move would result in flags being raised again at dusk on Aug. 8.

“The numbers 88 are very significant in neo-Nazi and white supremacy movement. Why? Because the letter ‘H’ is the eighth letter of the alphabet, and to them the numbers 88 together stand for ‘Heil Hitler.’ So we’re going to be raising the flag back up at dusk on 8/8,” Figluizzi added.

“Now, I’m not going to imply that he did this deliberately, but I am using it as an example of the ignorance of the adversary that’s being demonstrated by the White House,” he continued.